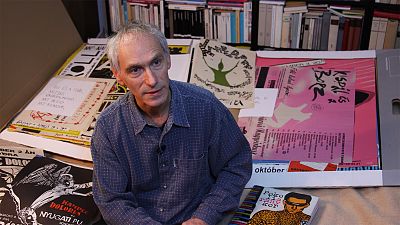 Back in 1978, Tamás Szőnyei - then a music journalist - started collecting posters that promoted underground musical events in Communist Budapest. Today, his one 1,000 poster collection is being showcased in a giant database with hundreds of thousands of cultural documents that dissented against the Communist regimes in Central and Eastern Europe.

"In 1978, when I was 21, I started to collect these Hungarian New-Age and underground posters. My motivation was that I loved the musical style.” Szőnyei told Euronews of how his archiving passion was born. “I went to the concerts and I really, really liked this visual style as well. And I wanted to be a journalist, to write about these bands. So these two motivations worked together. These posters have been exhibited several times. The first exhibition was in 1985. During this time, they didn't know that the end of the communist regime was near. It ended only 5 years later. In the 1990s and 2000s, I had some other exhibitions as well and we made an album with another collector. While we prepared this album, we had to collect a lot of data from the bands, for instance, who created the poster and so on. The band members knew that I was a collector, and they were happy to do that, because, through these means, the memories lived on, even if they did not keep any copies of the posters themselves."