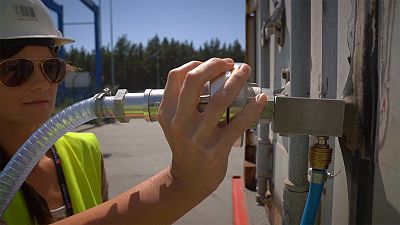 "The ultimate challenge for customs officers is to find weapons, drugs and dangerous products hidden among the millions of containers that cross our borders every day. In the commercial port of Gdansk, researchers are testing a technology that will allow more precise and quicker inspections.

Approximately three million containers are handled each year at the Deepwater Container Terminal in Gdansk, Poland. This is a huge logistical challenge for customs officers who lead random controls to detect illegal and dangerous goods.

According to Wojciech Gesikowski, a customs officer at the National Revenue Administration: "The most important thing in our job is to be sure that the objects inside the container really are what has been declared in the documents. That's why we use also non-intrusive technologies that help us to check the container without opening it."

A fundamental help will come from C-Bord technology, which has been tested here, in Poland. Target material, such as cigarettes, drugs and weapons have been hidden in "mock-up" containers to set up a realistic scenario.

This device will save officers a lot of time, says Guillaume Sanne, C-Bord's Project Coordinator: "The customs officer, thanks to this technique, will have a lot of information about what is contained and what is hidden in the container allowing them to avoid to emptying the container."

The inspection starts from the "sniffer". A probe, inserted in the container's door, sucks the air inside and sends the particles to a mini-laboratory which detects them in real time.

It's a highly sensitive probe, says physicist Peter Kaul: "The [Sniffer] system is designed to extract volatile substances from the container, which can occur in the presence of explosives, drugs, tobacco products or hidden persons. It can even extract dust particles which could stick traces of explosives or narcotics."

The next step is the Passive Radiation Detector. This procedure can be done in several ways depending on the size of the cargo. A truck can be analysed while passing through a portico or by an equipped vehicle turning around the container or, by an operator using a manual device.

The C-Bord project has improved the current X-ray detection ability enabling a better representation and material detection while the cargo is scanned.

Furthermore, at the end of the inspection process, the results of the various devices are all gathered on a common interface, where they can be viewed by the customs analyst. This technology provides quicker results and a wider flexibility in terms of use.

Sannie adds: "It's really very important for us to cope with all kind of weather conditions on the ground and the different objectives of the various customs officers of Europe. This is our challenge: to make our systems operational in all kinds of scenarios."

These three instruments will go for a final test with two other additional devices (the photo-fission technique and the tagged neutron inspection system) in the coming months at the seaport of Rotterdam, the largest terminal in Europe.