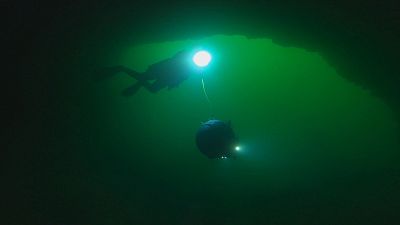 There are thousands of flooded mines in Europe. Many of them may still have industrial value, but it is difficult to know which ones. A robot that looks like something straight out of science fiction may soon be able to provide some answers.

Back in the 1960s, a pegmatite mine in central Finland was shut down and flooded. Today, it's a thrilling attraction for scuba divers brave enough to explore its flooded caverns. It's also a test site for a peculiar prototype developed as part of European research project, UNEXMIN.

Jussi Aaltonen, Mechatronics Engineer at the Tampere University of Technology, said: "We want to survey flooded mines because mines are seldom abandoned because the minerals are depleted, but they're abandoned for economical reasons. So there might be still some minerals of value, or there might be some new minerals which we might find."

The result of an international team effort, this robot has the compact shape of a metallic sphere and is stuffed with high-tech electronics. Sixty centimetres in diameter, it's built to withstand the pressure at 500m deep.

Longer under water than a human diver

According to Norbert Zajzon, UNEXMIN project coordinator and Associate Professor at the Institute of Mineralogy-Geology, University of Miskolc, "It can spend much more time underwater than a human diver. It can survive for five hours, even at greater depths than what is reachable to divers — because it doesn't need human life support systems, only electricity."

This field study will show how well the robot operates in a natural environment. The short-term goal is to make it completely autonomous — capable to enter a mine, map it and return on its own. This will take some additional testing and fine-tuning, but the researchers are expecting full autonomy within the coming months.

The robot is designed with sonars, laser radars, cameras and other sensors to help it understand the surrounding environment. These instruments are powered by heavy batteries that move inside the sphere, shifting the robot's centre of gravity as needed.

Alfredo Martins, Researcher in Robotics and Autonomous Systems, explains: “Inside we have a high-performance computer, with dimensions which were impossible to obtain just a few years ago. We have developed these lasers and other systems ourselves, which allowed us to meet key criteria, including miniaturisation.”

Euronews visited a testing centre in Portugal, where out journalists were allowed to take a dive with the robot to better see how it moves and uses its instruments underwater.

At the centre, scientists use a five-metre deep pool to work out the functions of the underwater vehicle under controlled conditions.

A robotic explorer can be of an immense value to the mining industry and emergency services. Its developers are planning to use it commercially for a site evaluation service — and they’re already getting calls.

Zajzon says: "There's currently an environmental issue at a Ukrainian salt mine, and they want us as soon as we finish with the project to go there and find out what's going on in their collapsing salt mines because it's too dangerous to send human divers."