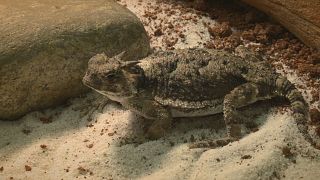 "Horned lizards" are the focus of their attention, as their skin has exceptional properties when it comes to transporting liquids.

Originating from desert areas of North America, these lizards need just the slightest drop of water to survive.

Nature has optimised a clever system that allows them to collect the drops of dew or rain that fall on their backs. It is a mechanism that is of the greatest interest to these researchers.

"The lizards we are studying here have a microstructure on the skin that allows them to get the liquid very quickly between the scales of the skin," explained biologist Florian Hischen from Johannes Kepler University Linz.

"And between the scales in the skin we have a capillary system, a channel system, that transports the liquid very quickly and passively towards the head of the animals, where they can then absorb and drink the liquid from their channel system with the corners of their mouths."

Flat bugs are playing their part, too

In addition to lizards, scientists are also interested in flat bugs from the rainforests of South America. A powerful electron microscope allows a three-dimensional model of the animal's surface to appear, at nanometre scale.

"We discovered that, with insects and bugs, even smaller microstructures are responsible for the transport of defence secretions in a certain body direction," Hischen told Euronews.

In Crete, near Heraklion, the Forth Institute is also involved in this European project. Scientists there specialise in laser technologies. Their objective is to reproduce on artificial materials the models brought to light by the biologists. They use short pulse lasers, enabling work on a very small scale.

"When your material is shocked with a laser beam, it is forced to change its structure," said IESL-FORTH optical engineer Evangelos Skoulas.

"You can fabricate 3 dimensional structures. Their scale, the resolution, can extend from several microns - imagine that your hair is 100 microns - up to tenths of nanometres."

"You can see here an area that is patterned at specific locations with specific structures, hydrophilic or hydrophobic. This combination of patterns can drive the liquid to a specific direction with the highest possible efficiency."

In particular, tests are being carried out on steel. Among the applications envisaged is the manufacture of innovative micromechanical parts, whose friction, and, therefore wear and tear, would be reduced.

"If we have micromechanical components, we have two surfaces that are in contact to each other with a lubricant, then, we can efficiently reduce the friction between the surfaces by adding a patterning surface structure with a specific geometry by patterning on those surfaces," said Stratakis.

Many other directions of research are planned for these biomimetic surfaces, from collecting water efficiently in case of drought to applications in the biomedical field.