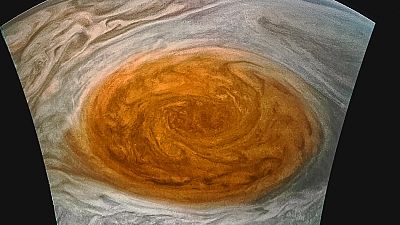 Jupiter’s Great Red Spot has been photographed up close for the first time by NASA’s Juno spacecraft, revealing stunning images of this swirling storm and vein-like clouds.

The pictures were taken on Monday 10th July as the spacecraft flew about 9,000 kilometres above the Red Spot, and were processed on Wednesday. Juno scientist Scott Bolton from the Southwest Research Institute in Texas celebrated the images: “For hundreds of years scientists have been observing, wondering and theorizing about Jupiter’s Great Red Spot, and now we have the best pictures ever of this iconic storm.”

The Great Red Spot is Jupiter’s best known feature, and it rivals Saturn’s rings as one of the solar system’s most beguiling phenomena.

The images were actually processed by what are known as citizen-scientists, the in-vogue phrase for amateurs, who were invited to take the raw images and extract as much detail and interest as they could.

Jason Major, a JunoCam citizen scientist and a graphic designer said: “It is always exciting to see these new raw images of Jupiter as they arrive. But it is even more thrilling to take the raw images and turn them into something that people can appreciate. That is what I live for.”

The raw images are taken in red, green, blue and infrared, meaning that different wavelengths can be accented in the image, highlighting certain features or patterns.

The huge circular storm on Jupiter is a third as big again as planet Earth, and remains something of an enigma to planetary scientists. The hope is that the data from Juno will allow the team to work out a little more about its past, present and future.

The feature has been followed since as far back as 1830, and it’s thought the storm may have raged on this gas giant planet for at least 350 years.

Jupiter is the big baby of our solar system litter – in fact, it’s two and a half times larger than all of the other planets in the solar system combined. Despite being so massive, it has no solid surface, and is made up of about 90 percent hydrogen, with some helium and other gases. It may have a solid rocky core, or have a molten ball at its centre.

Juno has now been at Jupiter for just over a year, and aims to complement the ESA-NASA-ASI Cassini-Huygens mission at Saturn, which has led to an extraordinary range of discoveries since arriving in 2004. 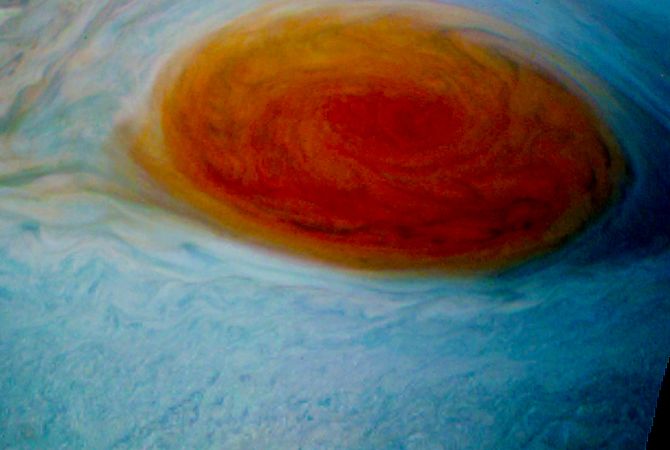