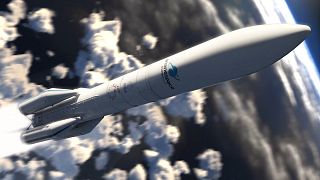 There are big changes in Europe’s space sector, with the launch at the Paris Air Show of ArianeGroup, a fusion of Airbus Safran Launchers and commercial space operator Arianespace. Euronews spoke exclusively to Alain Charmeau, head of the newly formed entity, about the challenges ahead for the firm.

“The space industry is evolving, the number of satellites is growing, as are the number of clients that buy launching services,” explains Charmeau as he justifies the re-organisation of launcher construction, operation and services in Europe.

“We felt the need to bring this market together and join our understanding of this market growth, of our research team, of our engineers who conceive tomorrow’s launchers, such as Ariane 62 and Ariane 64.”

The two versions of Ariane are slated to cost half as much as an Ariane 5, and the two options offer two different lift capabilities.

ArianeGroup employs 9,000 people in Europe, and the new entity now re-groups all of its subsidiaries – Arianespace, APP, Cilas, Eurockot, Nucletudes, Pyroalliance and Sodern – under one umbrella.

The space launch business is fiercely competitive, with new players from India and China now joining the more established businesses in Europe, Russia, and the US. Charmeau told Euronews that he believes that Ariane Group has an advantage over newcomers as it has a whole ‘family’ of launchers, ranging from the smaller Vega to the heavy lift Ariane 5, which will be replaced by the Ariane 64.

He has great faith in the Group’s products and vision for a flexible and lower cost rocket offering: “We are certain that Ariane 6 is the right product because our clients say so. It’s not only what our own engineers say, but our clients. That’s what matters.”

Arianespace now has an enviable reputation in the launch sector for reliability, and stressed time and again at the Paris Air Show how its customers came from the commercial sector – such as telecoms operators – rather than the institutional clients that others may rely on.

The rocket business in Europe has undergone a change since the European Space Agency ministerial meeting in Luxembourg in 2014 in which politicians decided to shift responsibility for access to space to industry. The formation of ArianeGroup is seen as logical development of that initiative.