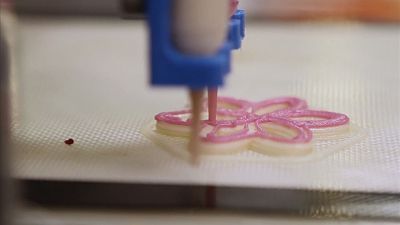 Could food be about to go digital? A team of engineers at Columbia University think so. They’re working with chefs to create a 3D home food printing machine.

Digital cooking could be coming to your kitchen. And it could have major implications for nutrition and health care in a future of highly customized food production.

“In the kitchen we still cook like cave men, we cook over an open flame, we use very primitive tools. But what will happen when this technology will enter the kitchen, I think it’s going to be a revolution and you know, when I talk to people, I often find that people’s reactions often depends on their generation.

‘Some people will think “OK, it’s a really bad idea, I want to do everything manually, the old fashioned way”. But then you have younger generations for which it seems very natural that you’d cook with software,” opined Hod Lipson, Professor of Robotics Engineering, Colombia University.

A team of researchers at Columbia University has developed a 3D food printer capable of printing and cooking food https://t.co/rl8BPykqo9

The digital dinner was put to the test in a working Manhattan restaurant kitchen. Engineering students and chefs teamed up for a two-day 3D food-printing marathon.

With sleek laptops next to the stoves, the teams made polentas, purees and desserts with their own original designs.

Chef Hervé Malivert from the International Culinary Centre in New York City came up with the recipes for the team.

“So we developed different flavours, with vegetables, with polenta, with chicken, with fish and we were able to print. My only kind of concern, you know as a chef, that I stepped back on it, is the changing of the connective tissue, the texture, because at the end you are pureeing everything,” explained the chef.

The students also did tests with egg salad, salmon mousse and chocolate souffle anything that could be put through a printer nozzle.

The challenge was to find the right structures and shapes for each of the food items’ consistency and to play around with the temperatures.

“For decoration, to use the printer to make a decoration over a dish like I did over a legume puree, with a chestnut puree, I did a little in 3D and then we put it together with a traditionally-cooked fish or chicken. So for little decorations incorporated to a dish, yes, maybe. But to do it with meat..hmmm I don’t think so,” said the chef.

The team at Columbia University has already created a prototype designed to hold multiple cartridges of food.

People with specific food allergies to the more health conscious might be the future users of the 3D home food printer. And the possibilities are endless.

“In that same way we might have access to new kind of foods that we can’t make ourselves, we can’t buy or we can’t pay somebody to make. We will be able to share food across the planet with loved ones.

‘We’ll be able to, some recipes might go viral and we’ll be able to taste them on the spot. And particularly we might be able to connect food with personalised health, biometrics, personalised medicine, our genome, in ways that we can’t do today,” concluded Professor Lipson.

And when could you buy the printer and set it up in your kitchen ready for that first digital meal?

Researchers say their innovation is more or less ready, and that marketing it is more a business question than a technological one.

Turn off the gas, turn on the printer.