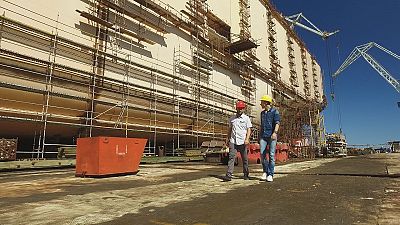 Today, the shipping industry finds itself in a sea of change. New international standards require vessels to reduce air pollution, meaning fewer emissions. It’s a challenge for builders as altering a ship’s power can sacrifice safety.

How can the industry ensure that marine vessels remain safe while cutting emissions? A shipyard in Croatia is helping scientists to improve maritime transport.

Founded 160 years ago, Uljanik is one of the world’s oldest shipbuilding companies. Company naval architect Igor Lalović explains the challenges and risks of reducing emissions in large vessels:

Igor Lalović: “The most easy way to do it is to reduce the ship’s power. But then we come to the problem of the maneuverability, because the less power a ship has it’s less maneuverable.”

Denis Loctier, euronews: “And what can happen to an underpowered ship in a storm?”

Igor Lalović: “For example if you are caught in bad weather near the shore, you can’t fight the current that’s heading your way and the wind – you can get grounded, or even in high waves the ship can get turned and capsize, so there’s a big risk of losing human lives.”

Nearing completion at the yard is a cargo vessel designed to carry 7000 cars across the ocean.
It’s part of a European research project in which scientists are looking for ways to make ships more energy-efficient – without cutting their propulsion power to unsafe levels.

Igor Lalović: “We can increase the efficiency by reducing the ship’s weight – for example, by installing innovative materials or special propulsion devices that are put in front of the propeller that optimise the inflow of water to the propeller, and this way we can reduce the CO2 emissions.”

In Spain, scientists and engineers are conducting controlled tests in a hydrodynamic center – a large water basin with a computerised wave generator that can simulate ocean and sea motion.

Adolfo Maron, naval architect and ocean engineer/manager of experiments, CEHIPAR:
“We can determine whether the passengers will have sea sickness, whether the structure is sufficiently rigid to withstand the waves, and whether the boat will consume more fuel, so we can try to minimise the pollution.”

Scale models with sensors measure the forces that affect ships in adverse weather and help determine ship stability in waves of varying sizes and periods.

Adolfo Maron: “Before conducting the tests, we use a special software to define the movement we want to assign to the paddles to reproduce the sea. In fact, the computer controls 60 independent flaps that can generate waves of any kind.”

An accurate transfer of model data to full-scale ships is not a trivial task – but by no means impossible, says professor Papanikolaou who coordinates the research project.

Apostolos Papanikolaou, SHOPERA project coordinator; director of ship design laboratory, National Technical University of Athens:
“Of course some uncertainties will remain, but these can be resolved with research experience, so that eventually the prediction of what we’re doing for the full-scale ship is reliable enough for practical applications.”

With new knowledge in the marine transport industry the key will be to find the right balance between efficiency and economy and safety and sustainability.