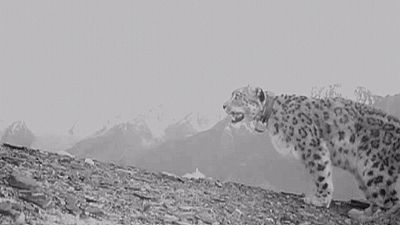 According to estimates, the population now exceeds one hundred in the area. It’s the result of a seven-year effort by the New York-based Wildlife Conservation Society (WCS) to bring the species back from extinction.

The leopards range across the snowy mountains of Central and South Asia, but numbers had been declining in recent decades as hunters sought their pelts and farmers killed them to protect livestock. Conservation efforts by the WCS include enclosed corrals with mesh roofs to protect livestock.

“In the past, wild animals were responsible for killing a lot of the livestock, but we’ve managed to curb that to a certain level. Over the past three years, there haven’t been any killings of farmed animals by wild animals,” says Sayed Naqibullah, WCS provincial project manager.

However, despite a countrywide ban on hunting snow leopards since 2002, the practice has not been completely eradicated according to Mostapha Zaher, director general of the National Environment Protection Agency for Afghanistan: “We receive reports from all of the provinces that hunting is still going on illegally, whether it is because of poverty, whether it is as a hobby, whether it is for selling it.”

Afghan and foreign scientists monitoring the snow leopard population through a network of cameras and traps have so far managed to fit four leopards with collars and track them with GPS. Since declaring the national park two years ago, the government has been holding public meetings to cultivate local support and reassure residents.

“It is a new concept for these people, a new concept for Afghanistan in fact, so it takes time to do that, but we are getting there and they are starting to understand that they are not going to lose land or anything crazy like that, which is the important thing,” says Ashley Vosper, landscape expert with WCS.

Moreover, experts says the park actually provides protection to residents by ensuring no one else can use their land. Even if the chances of seeing one are very slim, the snow leopard is the national park’s star attraction. It’s hoped initiatives like this will one day draw more visitors to Wakhan, one of the poorest and most isolated regions on earth that remains plagued by the ongoing war in Afghanistan.

The United Nations Development Program plans to spend $3 million on the snow leopard project over the next two years, with the hope that Wakhan might one day rival Afghanistan’s other national park, in the central Bamiyan province.