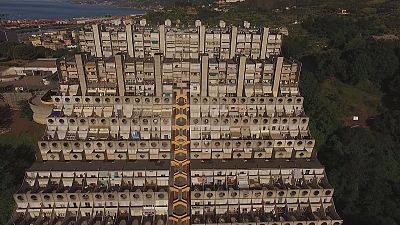 Apparently they can! In Genoa, Italy, a complex, nicknamed ‘the washing machine’ due to its facade made up of concrete slabs with empty circles, is a shining example of what can be achieved.

The architecture, which could been as an atrocity, from the 1980s, is a monumental metaphor of the social and economic problems of its inhabitants.

“The people here call the district ‘Lavatrici’ (which in Italian means washing machines) as the block looks like washing machines stacked side by side. The way it was constructed sort of makes it seem like a monster, a construction monster.”

In a precarious state

The ‘Lavatrici’s’ structural problems are laid bare when it rains. As rain enters the apartments it also weakens the building’s structure.

“The windows did not shut well, there were drafts and rainwater infiltrations. In winter time, even with the heating on, we barely reached 16 degrees,” said Pandolfini.

“At the same time heating is where we have spent most money until now.”

How might the city of Genoa take action while Italy is enduring an economic crisis?

,onyxsolar</a> in the 5th <a href="https://twitter.com/R2CITIES">R2CITIES project meeting, coinciding with the “Genova Smart Week” #I+D+i #GreenBuildinghttps://t.co/4wDn1Fqr93

“For Lavatrici, the project R2cities is an opportunity. The chance to make some interventions that otherwise would probably never have happened. It’s been a great opportunity” said Corrado Conti, an engineer on the project.

The project aims to make old buildings energy efficient and cost effective. A new heating system for the 162 households is key to this.

At the cutting edge

Four of the flats will be transformed into a field laboratory to measure the changes in energy consumption.

Renata Morbiducci from the University of Genoa, is the monitoring system coordinator. She said:

“In the central room of the apartment, where we have installed our monitoring terminals, we can see the data that is collected in the different rooms, like the temperature readings at three different heights in each room, the relative humidity, air velocity and the quality of the air, like the concentration of CO2 and the light levels.”

The combined retrofitting measures are expected to save enough energy to make individual bills fall by 50 percent.

“In each apartment we have installed satellites with small units inside; electrical valves, heat counters and other devices. When we connect it to an automated unit, we can invoice and also regulate the heating.” Corrado Conti, an engineer working for the Municipality of Genoa explains.

“This means the energy provider can read the consumption of each apartment remotely, and invoice according to the actual energy that was consumed.”

Save money and be green!

“I think that here we don’t yet have an ecological conscience. However I think that the issue of saving money, consuming less energy, and therefore having less costs is felt strongly by people here.”

People like Sergio, who has spent 20 years of his life here, point out that these improvements will have wider reaching effects: “If we can have a better indoor climate and save money from heating, our quality of life and behaviour will improve, and our overall wellbeing will improve: there is much expectation in this sense.”

Future plans include a new rooftop photovoltaic plant that will power the lifts and the stairway lighting.

The European project R2cities is working in cities in Italy, Spain and Turkey. The strategies developed are hoped to be applicable for large scale renovations all over the world.