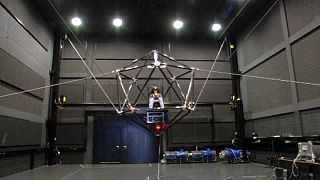 This is a virtual reality experience like no other. You can have the sensation of flying a helicopter with you eyes! The feeling of physical movement is now within the realm of virtual reality.

The cable robot , developed in Germany – consists of a platform, suspended from the ceiling at the Max-Planck-Institute. Eight cables, connected to engines on the ground, hold a platform in place. A robot can move this platform up, down and from side to side.

Scientists are studying the vestibular system, the balance organ in the inner ear. This simulator opens up entirely new possibilities in the study of motion perception and neurological research into balance disorders.

Phillip Miermeister, a Scientist at the Department of Human Perception, Cognition and Action at the Max-Planck-Institute for Biological Cybernetics explained to reporters:

“This is the place where we control the simulator. And now I can show you the platform that we have designed for this robot. We have a carbon fibre construction, in total the whole robot weights just 80 kilograms. We used aerospace technology in order to create the lightest possible cabin using readily available products.”

The robot could be scaled down and installed in a smaller room but the Institute has no plans to put it on the market just yet- for them it’s all about the science.

“It really feels very realistic. This big space brings a lot of advantages. You don’t have to remove any movements that the car is making, you can keep them in to make it as realistic as possible.”

As thrilling as the experience looks, this is just a prototype. It now appears that we are entering the next stage in virtual reality, one in which helicopters can be piloted with just our eyes.