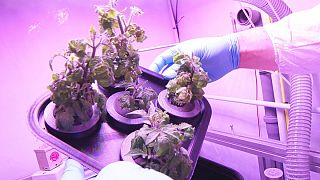 Is is possible to produce food to eat and air to breathe while in space? The short answer: it’s not easy, but it can be done.

Urine is a 'yellow gold' when you're producing food for humans on Moon and on Mars.

Right now, if you’re an astronaut, you’re given pre-prepared food that was cooked on Earth and sent into space on a rocket. But if humankind wants to realise its ambition of travelling much further into the solar system it needs to find ways to create food and air while surrounded by the nothingness of space.

Exactly how much food and air has been precisely calculated. Brigitte Lamaze, from ESA, spells out the details: “The basic figures that are used are 5 kilos per astronaut per day in terms of metabolic consumption. So that means one kilo of oxygen, one kilo of dehydrated food, and three kilos of water, which are used as drinking water and to hydrate the food.”

Beginning with air, the MELiSSA pilot plant at UAB Barcelona is running a test system using rats and algae in which the rats breathe oxygen from the algae, and the algae breathe CO2 from the rats.

Francesc Gòdia, Professor of Chemical Engineering at UAB, explains: “The rats by breathing are producing the CO2. The micro-algae they capture this CO2, and with the light in the photo bioreactor are able to produce the photsynthesis, producing oxygen. And then the oxygen goes back to the compartment with the animals, and this is done in a close loop, continuously.”

One of the great challenges the MELiSSA team has overcome is developing a system to almost instantly increase oxygen production from the micro-algae.

“The illumination of the photobioreactor is more intensive or less intensive depending on the amount of oxygen that is required by the rats,” says Gòdia.

To explore the science of producing food, German space engineers are building a satellite to grow tomatoes in space. Called Eu:CROPIS, the spacecraft will launch in summer 2017, and will spin around the Earth as the seeds germinate inside.

The space botanists prefer plants with a high water content and high ratio of fruit to plant mass. They chose tomatoes for Eu:CROPIS for a simple reason: the red fruit is easy to spot on camera.

The key crop scientist at DLR is Dr Jens Hauslage. “We’re investigating the technology around plants,” he tells euronews. “Controlling humidity, controlling temperature, fertilizer solution and so on. How to grow plants also on different planets, for the exploration of humankind.”

The team will be using a fast-growing and fast fruiting strain of tomato called Micro-Tina.
When it comes to fertilizer, the space tomatoes will be watered by a natural by-product of astronauts.

“We are using urine,” smiles Hauslage. “So urine is really like a ‘yellow gold’ for plants when you’re producing food for humans in closed systems on Moon and on Mars.”

The plants won’t grow on soil in space, it’s too difficult to manage, but the spin of the spacecraft should give the seeds a good idea of which way to grow roots or leaves.

“We found that a plant needs only 0.1G for sensing the bottom, or for sending the direction, so it’s enough also on Moon and on Mars,” says Hauslage.

The MELiSSA consortium’s next goal is to develop methods to recycle solid and liquid waste from plants and animals.

ESA’s Lamaze concludes: “Growing plants in space is something we have to do, the longer the mission is, the more necessary it becomes. From the moment that we can’t bring along all the food requirement of the astronauts we have to find a way to produce this food.”

Food grown in space could one day make up a quarter, or even a half of daily astronaut needs, while oxygen loops and water recycling rates will climb much higher. Just in time perhaps for the first multi-year deep space mission.

Destination Mars, episode 5: Where do you look for life?