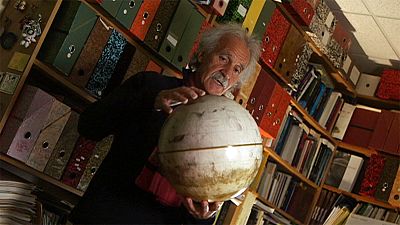 There’s a chance that life emerged on the red planet, deep in the past. But where is the best place to look?

Leading planetary scientist Jean-Pierre Bibring gives us his view: “On Mars there are two ice caps, and Mars rotates in just over 24 hours around this axis. There are huge plains in the north, and large plateaus in the south, which are plateaus several thousand metres high that are covered in impact craters. And between the two there’s a transition zone, and it’s in this transition zone there where we can get to land which is even older than the plateaus, which are 4 billion years old. And we’re convinced that if life began on Mars, that’s where you should go to look for it.”

Bibring, from IAS-Orsay, is in charge of the one of the instruments which will analyse the samples collected by the ExoMars rover.

“With ExoMars what we’re trying to find out is if early in the history of Mars there were conditions that allowed life to emerge, just as it did on Earth, from water and molecules brought from elsewhere,” he explains.

Of course, there’s no chance of finding little green men on the surface – Mars today is cold, dry and bombarded by harmful rays from the Sun that make it very inhospitable. Bibring tells euronews: “The hope is not to find a living organism directly. But if we find the precursors to living organisms in the form of macromolecules it will already be a huge step, because it would mean that life is sufficiently robust to have adapted to the Martian environment.”

The biggest hope is to look in the oldest areas of Mars, the regions that may have supported life an incredible 4 billion years ago. “What’s marvellous with Mars is that Mars has preserved the memory of the times when this emergence of life may have happened, and that’s what we’re going to look for with ExoMars.” says Bibring.

Growing food in space: A tale of rats, algae and tomatoes