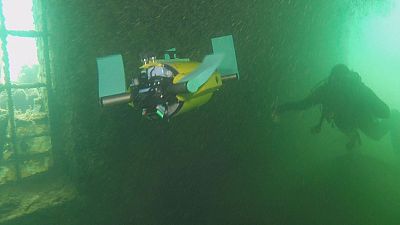 Underwater archaeology is an exciting, but sometimes risky field of studies. To eliminate those risks a European research project, ARROWS, is working to develop robots that help humans in dangerous environments.

A now flooded Soviet-era quarry in Rummu, Estonia is one of the project’s test sites. Buildings and machinery were submerged after it was abandoned in the 1990s and now it’s a popular diving spot. The area is also ideal for testing a new robot, U-CAT, designed to help underwater archaeologists working on shipwrecks or similar sites.

Explaining the device’s advantages Prof. Maarja Kruusmaa of Tallinn University of Technology’s Center for Biorobotics said: “It has to go into confined places, take video footage and come back again. It’s very little space sometimes there, so this robot can turn, manoeuvre around all axes, and come back.”

U-CAT works without remote control, following its program autonomously. Its sensors prevent collisions with walls and other underwater objects. The designers is biomimetic, meaning the robot simulates the movement of sea animals, like turtles..

“Instead of propellers it has these four fins which make the robot very well manoeuvrable inside the wreck,” said Taavi Salimäe, a researcher in underwater robotics involved in the project. “And also the fins help to bring up less sediment from the bottom of the ship, because if you start a propeller in a shipwreck it will bring up all the mud from the bottom, and you can’t see anything.”

Until recently, only the military and big oil companies could afford underwater drones. This simple device should be much more affordable for scientists, helping them to study undersea heritage without taking excessive risks.

“Losing a robot inside a shipwreck is much, much better than using a human diver. In many cases we wouldn’t penetrate shipwrecks because it’s too dangerous,” said Prof. Kruusmaa. It’s a clear situation where we would like machines to replace humans.”

The video and sonar data collected by the robots can be combined into 3D maps – an invaluable tool for discovering and preserving the hidden treasures of the seas.

But navigating and communicating reliably can be tricky, as Benedetto Allotta, a professor of robotics, University of Florence and ARROWS project coordinator explained: “When we’re doing archeological studies, it’s very important to know at which exact place a certain photo or video has been taken. Since it’s impossible to communicate via radio underwater, we have to use acoustic communication which is not very reliable, which is slow and has all sorts of technical problems for communicating and working with the robots, so we’re working on that within this project.”

A modular robot, MARTA, can operate as an undersea “interpreter”, coordinating simultaneously the work of multiple robots of different types and functions. Its shape and propulsion system allow MARTA to move fast, mapping large areas – alone or in a group.

“When this project was initiated, we were hoping to help archaeologists in their work,” added Prof. Allotta. “But now, at the end of the research, we think this technology could soon be accessible to many scientists working in various fields – such as biology or geology.”

Do you know: are there still treasures under the sea?