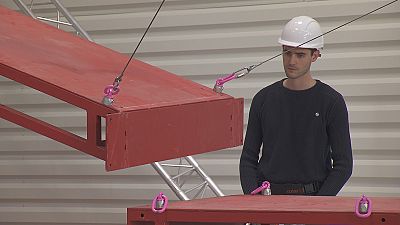 At a research facility near Montpellier in southern France, a mock-up of a heavy airplane wing is carefully manouevred across a test centre by automated machinery.

Europe needs to keep its industrial production, not to outsource to countries with cheaper labour costs. But for that, we need to reduce the manufacturing costs here. And the robotization of industrial manufacturing is the key to increasing European competitiveness

The operation is part of unique research that could ultimately play a part in keeping jobs in heavy industry in Europe.

The lifting machinery is a cable-driven robot, specially designed with accuracy and adaptability in mind, as CNRS/LIRMM Robotics researcher Marc Gouttefarde explains:

“Cables are very flexible components. They can only draw the platform; they can’t push it. So one of our challenges is to keep all the cables tight. The basic principle of a cable-driven robot is very simple. But if your goal is to perform a certain number of demanding tasks like going fast, holding heavy loads or being very accurate, that’s when you have challenges. To address those challenges, we turn to mathematics, to design the robot and to control it”.

The prototype has been designed by scientists at a European research project aimed at developing robots customised for the automation of large-scale industrial tasks. The robots can be easily modified for different tasks

“The robot stands on four columns that hold its whole structure,” says Mariola Rodríguez, an industrial engineer involved in the Tecnalia/CABLEBOT project.

“But we could also have three columns. Or the columns could be placed at distances other than the ones we have here. Modularity also implies that we can play with the mobile platform. The one we have here has a cube shape. But its shape could also be a trapeze, or we can attach the cables directly to the piece we want to move around.”

“We have adapted our attachments to this piece. It’s flat, so we had to calculate the best position for the cables to be attached, so that we can easily move the piece along the three translational and rotational axes in the space. That way we’ll be able to work on a large surface in the safest possible way.”

And that offers huge advantages to makers of industrial handling systems, according to José Ignacio Olmos, General Director of Spanish manufacturer Vicinay Cemvisa:

“These cable robots are complementary tools to cranes, hoists, chains or other handling systems. They can be extremely precise in their movements. They can easily move large parts of huge structures so they can help in mounting those structures.”

It took researchers three years to develop the complex network of software tools needed to design the layout and geometry of the cable robot. They then had to design the control algorithms needed to manipulate it. Now they are looking ahead to its future applications:

“We are currently working to improve the robot’s accuracy. A second evolution would be to test even bigger robots. The bigger the robots, the more complex the problems we have to address. But in the future we’ll need bigger and bigger cable robots, since we’re targeting sectors like aerospace and maritime transport,” says Gouttefarde

Mariola Rodríguez believes the research could ultimately boost European heavy industry competitiveness: ““Europe needs to keep its industrial production, not to outsource to countries with cheaper labour costs”:http://www.euractiv.com/sections/europes-industry-halting-decline. But for that, we need to reduce the manufacturing costs here. And the robotization of industrial manufacturing is the key to increasing that European competitiveness.

The researchers say the robots they are working on could become a working reality in less than two years.

Do you know: what's a cable robot?