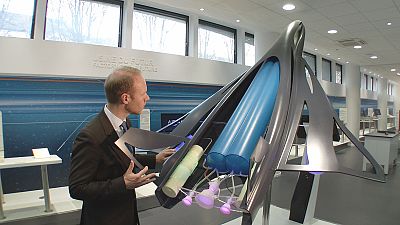 Passenger planes today are comfortable and reliable, but could they fly faster? The latest engineering developments suggest we could speed planes up several times over, creating true aircraft of the future.

The objective of a high-speed plane is reducing journey times, aiming to travel, for example, between Europe and Japan in around three hours.

From the shape of the plane and the choice of engine and fuel, to the environmental impact and economic viability – a European research project is studying, in cooperation with Japan, all aspects of passenger flight at several times the speed of sound.

The results could change the way we see long haul travel, according to Emmanuel Blanvillain, a researcher in conceptual aircraft design at Airbus Group Innovations. He is also the HIKARI project coordinator. “The objective of a high-speed plane compared to planes we know today is reducing journey times, aiming to travel between Europe and Japan, for example, in around three hours.”

Planes this fast will need new technologies of propulsion, new materials and completely new designs, developed by research and industrial partners from Europe and Japan.

But they won’t look that different, said Patrick Gruhn, a research engineer in high speed aerodynamics at DLR: “You can imagine other shapes, but they will have a lot in common – you always need these steep angles, a very aerodynamic design, because otherwise the drag just gets too high, and you won’t get enough thrust from your propulsion system to accelerate the vehicle.”

Scale models are placed inside this 60 metre-long tunnel. This is where the extreme air pressure occurring in a hypersonic flight can be accurately generated.

Klaus Hannemann, a researcher in aerothermodynamics at DLR explained: “In this wind tunnel we can generate extraordinary high speed airflow, so we can simulate the re-entry of vehicles like the Space Shuttle Orbiter or, what’s interesting now, the flight of hypersonic vehicles at Mach 8 at 30km altitude.”

The experiment is ready to go: precise instruments will collect aerodynamic measurements in a fraction of a second.

Johan Steelant, a research engineer in propulsion and fluid dynamicsat the European Space Agency, who is also an ATLLAS & LAPCAT projects coordinator, says that flying at faster speeds wouldn’t feel that different to passengers: “You wouldn’t feel that much difference compared to being in a classical aircraft – only the time aspect will be different. We’re talking about acceleration times in the order of 20-30 minutes. But you can still have a relaxed flight, enjoy the acceleration and see that you’ve crossed the sonic barrier and go even beyond that.”

Most of the concepts place passengers beside the fuel tanks that would occupy a large part of the plane. Among other fuel options, researchers are consider liquid hydrogen: it doesn’t produce CO2 and can be used as a coolant.

Hideyuki Taguchi, a researcher in propulsion systems at the Japan Aerospace Exploration Agency, said: “We need to develop a propulsion system to be operated from take-off to Mach 5. Flying at the Mach 5 means a very hot structure for the engine, and our solution is to reduce the temperature by cooling hot air by using the very cold fuel.”

In another wind tunnel researchers test special ceramics that can withstand extreme temperatures. These materials can protect the leading edges of a hypersonic plane that will be heated by air friction to thousands degrees celsius. Again, passengers wold be unlikely to feel much difference. Burkard Esser, a research engineer in fluid mechanics at DLR said: “The objective is to keep the hot part narrow, so that the heat load to the passengers would remain as small as during the normal flight.”

The timescale that researchers have given themselves to produce a commercial plane is 2040-2050, but it depends on technical developments.

Do you know: how to fly around the world in 3 hours?