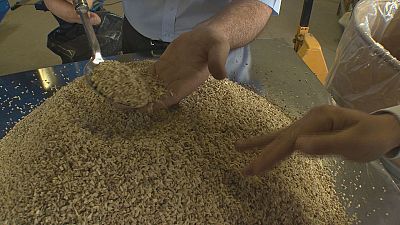 Is it possible to produce fertilizer from animal bones? And what are the potential benefits for agriculture and the environment? To find out Futuris went to a test plant in Hungary, where an unusual experiment is under way.

Scientists from a European research project called Refertil are trying to develop an organic phosphorous fertilizer out of an unlikely ingredient; pig bones.

To explain more Edward Soméus, an environmental engineer with Terra Humana Ltd and Refertil project coordinator showed us some bones.

“You can see here food quality pork bones, which are rich in phosphates and other minerals. By burning this material we can create charcoal that can be used as a phosphate supply in bio-farming,” he said.

The bones are burnt at an average temperature of 600ºC, in an oxygen-free vacuum. No gases are emitted into the atmosphere.

The resulting product, known as bone biochar, is rich in minerals and, unlike agro-chemical fertilizers, it is virtually free of heavy metals.

Seemingly, an ideal organic phosphorous fertilizer, according to the researchers.

“These bones have macroporosous structures. That’s really good for the microorganisms in the soil, especially the fungus.” Soméus explained. “Fungi can enter and practically use it as a house, where they can live”

The product’s quality and safety are analysed at a laboratory in Budapest. Researchers say it is free from potential contamination sources, like heavy metals and certain types of hydrocarbons.

Samples of the bone charcoal have also being analysed to identify its inner chemical secrets.

The results are promising, says Zoltán Palotai, a chemist, at Wessling Hungary lab: “This product can be a good natural supply of phosphates for the agricultural soils in the future, because it contains 30 percent of phosphate. Apart from the phosphorus, it also contains a lot of calcium, since the major element in it is calcium phosphate”.

Researchers are now studying how those contents could be useful for food crops. They have come up with some positive conclusions.

Massimo Pugliese, an agronomist at the University of Turin has also worked on the project.

“Using a high-quality fertilizer from animal bones allows the plants to better resist environmental stresses, like droughts. It also helps them to better fight against pathogens. And at the end, this is what’s going to allow plants to yield better crops,” he says.

The next step is marketing. At a waste treatment plant near Budapest, 5,000 tons of bio-compost are produced every year. Managers there believe bone byproducts could make a good natural fertilizer by themselves, or as a complement to other fertilizers – if the price is right.

“The real question is competitiveness. Even if, scientifically, we can prove it has a favorable effect, the question is if whether the market will support the additional costs of the biochar mixing,” says László Alexa, managing director of the ProfiKomp plant.

Researchers are optimistic bone-derived organic fertilizers will be a competitive product used on crops in Europe within five years.

Do you know: do plants eat skeletons?