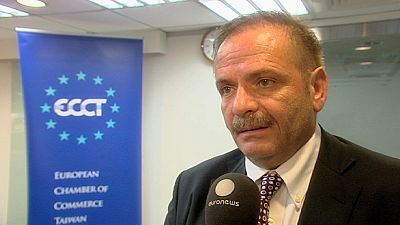 Taiwan is looking to boost trade with the European Union – and economists say given the bleak state of Europe’s economy, the EU also needs an agreement as it has not been fully exploiting the potential of the Taiwanese market.

Improved relations between Taiwan and mainland China, which rejects the island’s independence, provide another incentive.

“Taiwan is a small country, isolated diplomatically, without natural resources, but it has become one of the world leaders in information technology,” said euronews correspondent Margherita Sforza, who visited the birthplace of this Asian tiger in what is known as Taiwan’s own silicon valley.

Founded in the 1980s, the Hsinchu Science Park is home to over 400 companies and research centres, specialists in producing electronic components for computers, and in nanotechnology. One firm which grew up there, TSMC, is a global leader in the semiconductor industry.

It is estimated that Taiwanese IT companies help produce 80 percent of the world’s laptops, which are then assembled in neighbouring China.

Close ties between the industry and universities are held up as a key to success.

“In Taiwan although it’s a small country, we have a lot of industrial clusters, we can go through those clusters and get things done very quickly,” said Frank L. Chen, Director General of the Industrial Technology Research Institute.

Taiwan is the EU’s 23rd largest trading partner. For the island, the European Union is the fourth most important, and its biggest foreign investor. The EU mainly imports electronic components and exports machinery and chemicals.

Now Taipei is urging Brussels to sign a bilateral free trade agreement, as the EU did with South Korea, Taiwan’s biggest electronics competitor.

One leading nanotechnology firm from Belgium, Imec, has opened an office in Taipei to strengthen ties with local industry and the scientific community.

“As the risk in developing those next generation technologies became so high, associated to the cost also, it becomes very important for those companies also to rely on an external partner to share the risk,” said Luc Van den Hove, Imec’s President and CEO.

Taiwan’s economy is not only driven by computer technology.

An hour’s drive from the capital in the countryside, is the Kavalan distillery, which takes advantage of the tropical climate to make whisky in record time. Four years ago its product beat several Scottish brands in a blind taste test near Edinburgh.

The malt is imported from Germany, and the technology comes from Scotland, but the Taiwanese have learned quickly. In just five years they won 60 international awards and their whisky now sells all over Western Europe.

“We haven’t encountered too much problem (in trading with the EU) but of course if the EU can lower the excise taxes and so on, that would make our products more competitive in European markets,” said Kavalan’s Global Business Development Director, Ian YL Chang.

The European Commission is working to cut red tape but the European Chamber of Commerce in Taipei, representing over 400 European companies, would like a more ambitious free trade agreement which it says would greatly benefit Europe’s economy.

“Opening free exchange would inevitably create more Taiwanese investment in Europe, bringing more employment, this would be a clear and immediate benefit,” said Giuseppe Izzo, Chairman of the European Chamber of Commerce in Taiwan.

In an updated version of a study first carried out in 2008, Nordic consultants Copenhagen Economics said Taiwan’s efforts to boost trade elsewhere could lead to the EU being “one step behind its main trading partners with respect to gaining access to the Taiwanese market”.

The consultants concluded that compared to 2008, the need for a trade agreement between the EU and Taiwan had become “more urgent” especially in view of “the bleak outlook for the domestic European economy”.

Although the European Commission hesitates over trade negotiations with Taiwan, officials play down fears of offending Chinese sensibilities and dialogue is happening.

Taiwan now has its own agreement with China, with the 2010 Economic Cooperation Framework Agreement (ECFA) – which Copenhagen Economics sees as sending “a strong political signal to the outside world” about a much better relationship between Taipei and Beijing.

This could remove an extra diplomatic obstacle to an eventual deal between Taiwan and the European Union and perhaps provide a stepping stone for the EU to enter the mainland Chinese market.