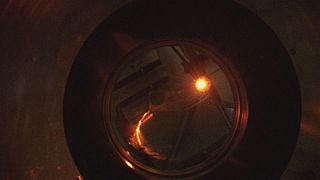 For centuries astronomers have chased comets across the skies, looking for clues as to the origins of our solar system. Tugged from deep-space by the gravity of the sun, they shed dust and gas as they warm, revealing some of their secrets within.

Beguiling and bewildering in equal measure these celestial visitors continue to hold the fascination of today’s stargazers. In this edition of Space we talk to some top European scientists striving to unravel the mysteries of comets.

As a starting point Hermann Böhnhardt, Senior Research Scientist, at the Max Planck Institute for Solar System Research put comets into perspective: “A comet is a piece of rock and ice, mixed together, roughly to imagine, something like Mont Blanc, or one of the larger mountains in the Alps – that is the size of a comet.”

Frozen within this rocky mass are secrets about our own origins, according to Gerhard Schwehm, Cometary Scientist at the European Space Agency:
“Comets are interesting for a lot of reasons and one reason we are looking- and it’s the most fascinating reason- is ‘have comets played a role to bring life onto Earth’?”

At the University of Bern the research is a little more down to Earth, and somewhat unusual. Here, they make their own comets in the laboratory. Professor of Experimental Physics Nicolas Thomas talked us through the steps: “First of all we need to create a sort of a liquid, and so we’re mixing 50% of our comet, that is this water ice, we’re mixing it now with a little bit of liquid nitrogen. And we’re using carbon black – it’s finely divided carbon particles. And now we do some comet cooking.

“Now the liquid nitrogen is currently sitting at around minus 200 degrees centigrade, and that’s keeping the water ice from evaporating and keeping it from sticking together. What we do now is that we tip the mixture into a sort of a mould……and that is a fake comet, ready for experimental studies.”

While replicating the conditions of a comet in the laboratory undoubtedly helps researchers, there’s nothing more revealing than a close encounter.

In the German city of Darmstadt is the European Space Operations Centre, home to the world’s most ambitious comet chasing mission, known as Rosetta.

In 2014 this ESA probe will do something quite extraordinary – catch up with a comet, fly alongside, and put a lander on its surface.

It is an enticing prospect for Gerhard Schwehm, an ESA cometary scientist: “There are great hopes in the science community for the results from Rosetta. We don’t know what a comet feels like. Is it it like very powdery snow like when you go skiing? Is it something like hard that ‘s just snow that has been sitting on the side of the road for a couple of weeks at minus 20 degrees and it’s really hard? That we don’t know.”

“We know, we have an idea how a comet works, but the details are missing, and that we can study with Rosetta. With the instruments we are putting there, they are really very sophisticated, we will get in detail the molecular composition, we know which elements are there, we will measure the isotropic ratios, and that gives us a lot of information about the evolution history of that comet.”

The fake comet experiments at the University of Bern are linked to Rosetta. The scientists use their readings to better interpret the data they will get from the mission.

Ground-based observations often give great detail, but the biggest leap forward in comet science has come with space missions. One of the first major landmarks was in 1986 when ESA’s Giotto mission sent back close-up pictures of Halley’s comet. It showed a dark, ancient nucleus, billions of years old.

Then in 2006 NASA’s Stardust mission flew right through a comet’s tail and brought a sample of dust back to Earth. Inside that sample the scientists found something rather curious, as Hermon Böhnhardt explained: “The dust was analysed in laboratories and they found of course interesting molecules there, but the most interesting thing they found is glycene. Glycene is an amino acid which is used in the DNA of life on Earth, it’s one of the four basic amino acids used in our DNA.”

Scientists were intrigued to find amino acids in comet dust. For Hermann Böhnhardt, the discovery raised profound questions: “Life on Earth uses a specific type of amino acids, the so-called left handed amino acids. In nature they are in principle, or chemistry can produce left and right handed ones, but life uses only the left handed one, and we want to understand why so, it’s not known, and we want to understand whether the amino acids in comets are left or right handed, because if we find only left handed then this is the next hint that maybe life, or the ingredients of life were brought from extraterrestrial space to Earth.”

Rosetta could help us solve so many riddles – not only about the origins of life, but also the question of whether water on Earth was brought here by comets.

It seems a whole new comet hunt is underway.