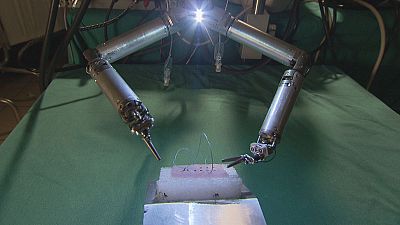 A team of scientists in Italy have been working on a unique robotic surgery system.

They hope that one day robots could take over the work of surgeons in operation theatres.
Gianluigi Petroni is one of the biomedical engineers at the SSSA Biorobotics Institute, he describes one of the procedures that robots could soon be performing:

“The robot enters the patient’s body via the navel. We firstly insert a small capsule. Then the two robotic arms are inserted through this capsule one by one. Once inside, the robot is configured to be remotely controlled by the surgeon.”

The robot sends 3D pictures to help the surgeon execute precise, non-invasive surgery on delicate parts of the human body without any visible scar.

Luca Morelli a Surgeon at Cisanello Hospital in Italy says the technology could prove extremely useful:

“Single port access surgery – surgery with a single small incision – has very few applications today. This technology could help to increase the number of applications, allowing us to perform more complex surgeries on the liver or the pancreas, organs that are too difficult reach with this kind of surgery at the moment.”

Researchers are now making plans to bring the prototype into real operation theatres but before this can become a reality there are a few things which need to be ironed out, as Arianna Menciassi, another SSSA Biorobotics Institute engineer explains:

“Before the robot can be mass produced, we first have to think about how to sterilise the motors. We will also have to do more research on some of its mechanical features so that they can become more reliable and less expensive.”

“Miniaturising the robot will demand smaller motors that will use less power. But we need the robot to demonstrate a certain strength for moving inside the human body. Solving this will be a huge challenge.”

Paolo Dario is the Coordinator of the ARAKNES project at the SSSA Biorobotics Institute. He spoke of their ultimate goal:

“A robotic surgery system has to be good, it has to meet realistic demands. It has to be reliable and not too expensive. But the technology has also got to be properly maintained so that the patients know they can trust it before going under the knife.”

But the European researchers are not content with developing robots to help surgeons with operations. They want robots to perform surgery on their own.

Moving to another research lab in Verona, euronews meets a group of scientists who think intelligent robots can be taught how to autonomously perform certain medical tasks like biopsies, incisions and suturing.

On show is a robotic arm that is being developed to puncture a model of a human abdomen on its own in search of a tumour in the kidney.

Researchers had to translate surgical techniques into numbers that were then transferred into the robot’s mechanical and software features.

Riccardo Muradore is the Control Engineer at the University of Verona where the robots are being developed, he says:

“We talked with surgeons to learn some of their techniques. But it is hard for them to accurately describe forces, speeds, the movements they perform during real surgery. So to solve this problem we also developed computer simulators to help us get the data we needed.”

The simulator helped the scientists to input realistic data to the robot to increase its understanding of different surgical scenarios and eventually to become more autonomous.

Monica Verga a biomedical engineer at San Raffaele Hospital has also been working on this project. She told us some of what they have achieved so far:

“This simulation helped us to define the requirements of a given surgery. But also to define some particular anatomical features of a kidney tumour: ‘how big is the average kidney tumour?’ or ‘what are the normal distances between human organs?’ We also tried to understand the biggest complications a surgeon can face during this kind of surgery, and how he might respond to those complications.”

Some researchers think surgeons will never disappear from operation theatres but see robots as a useful tool to increase the accuracy and efficiency of existing techniques.

Paolo Fiorini the Coordinator of the I-SUR project at the University of Verona says:

“A surgeon, a human being, is not always able to have the same perception, the same precision that surgical equipment and sensors can have. So an autonomous robot could eventually perform some surgical techniques while at the same time acquiring precise data that could complete what the surgeon can see and feel with his own eyes and hands.”

Some surgeons say they are curious to see what autonomous robotic surgery systems could be capable of. One of those is Umberto Tedeschi, from the Verona University Hospital:

“We can see today how a robot is able to perform a biopsy on a tumour inside a human organ. But eventually robots could offer something more when it comes to treatment: they could even try to remove it, or give drugs or any other substances that could help to get rid of it.”

Researchers and surgeons agree this is no longer the stuff of science-fiction. That is why, they conclude, the evolution of robotic surgery has to be closely monitored.

Paolo Fiorini of the University of Verona says:

“In the future robotic surgery will provide tools that are less invasive, that will reduce trauma to the patients and will be more and more intelligent.”

Arianna Menciassi of the SSSA Biorobotics Institute says that the work they are doing now is really like science-fiction becoming reality:

“Future robotic surgery will look a lot like what writer Issac Assimov talked of in his book ‘Fantastic Voyage’.

“Some scientists are already doing research on magnetic guidance of tiny robotic capsules inside human vessels. These robotic capsules could eventually reach the most remote regions of our vascular system and could offer treatment. We’re not talking about current procedures with scalpels and forceps. If for example an illness is present in just a small group of cells, therapy could consist of electrical inputs, or magnetic fields or something similar”.

After 25 years of research robotic surgery looks set for a big leap, but will patients be willing to put their lives into the robotic hands of a computer?