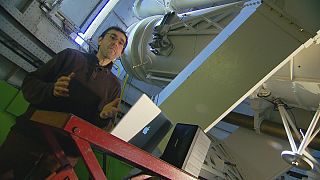 Just what are the sounds of space? ESA astronaut Frank De Winne listened to his favourite bands from Flanders when he was in orbit, while Space Shuttle astronauts were famously serenaded by REM, Elton John and Paul McCartney on their last mission.

But what does it sound like when you’re on the ISS, or in the middle of a spacewalk? De Winne and Canadian astronaut Chris Hadfield give us their haunting memories.

While astronauts take music into space, there are many who take inspiration from the stars in their music.

French astrophysicist Philippe Zarka finds new ways to capture the attention of astronomy fans with his audible transpositions of plasma waves and electron beams, and the world-famous Kronos Quartet incorporates these otherworldly sounds into a powerful piece of music called Sun Rings.