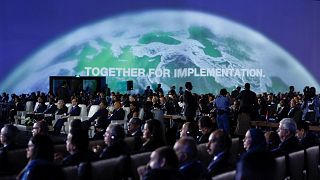 More than 25 countries at COP27 launched a group on Monday to hold each other accountable for a pledge to end deforestation by 2030. They also announced billions of dollars in additional financing for the effort.

The first meeting of the Forest and Climate Leaders' Partnership, chaired by the United States and Ghana, takes place a year after more than 140 leaders promised at COP26 to end deforestation by the end of the decade.

Progress since has been patchy, with only a few countries instituting more aggressive policies on deforestation and financing.

The new group - which includes Japan, Pakistan, the United Kingdom and others - accounts for roughly 35 per cent of the world's forests and aims to meet twice a year to track progress.

Notable omissions from the group are Brazil with its Amazon rainforest and the Democratic Republic of Congo whose vast forests are home to endangered wildlife including gorillas.

"This partnership is a critical next step to collectively deliver on this promise and help keep the goal of limiting global warming to 1.5C alive," said COP26 President Alok Sharma in a statement.

The statements said that around 22 per cent of the €12 billion in public money pledged for forests by 2025, funds committed in Glasgow, had so far been disbursed.

Among the new sources of financing, Germany said it would double its financing for forests to €2 billion euros through 2025.

What did countries pledge at COP26?

At COP26 in Glasgow last year, 145 nations representing more than 90 per cent of the world's forests pledged to strengthen conservation efforts.

Then UK Prime Minister Boris Johnson said it was a "landmark agreement". But critics at the time said the pledge lacked accountability and wasn't backed up by any strong or binding commitments.

Since last year, there have been no meetings to follow up on this pledge and take further steps.

On Monday, the UK launched the Forest and Climate Leaders' Partnership to "ensure a long-term delivery mechanism" for the pledge made in Glasgow.