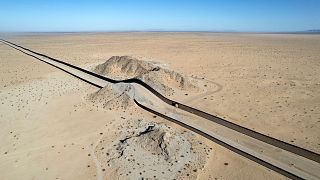 The US-Mexican border wall is blocking the movement of wild animals, conservationists have warned - causing a possible “ecocide”.

The lands of southern Arizona and the northern Mexican state of Sonora might look arid. But they’re home to thousands of native animal and plant species.

"This part of the border is one of the most interesting places in North America," says Valer Clark, founder of the transfrontier wildlife organisation Cuenca Los Ojos (CLO).

These animals used to roam freely. But the border wall - built in 1994 to keep migrants out - is threatening this freedom, and damaging the delicate local ecosystem.

How is the US-Mexico border wall hurting local wildlife?

Local conservationists have placed camera traps to track the movements of animals.

One family of boars spent five hours trying to get past the wall in search of water, says Jose Manuel Perez, CLO's conservation director.

"We are very concerned about the silence of the Mexican government, which is doing nothing to mitigate the effects of the ecocides resulting from the construction of this wall,” he adds.

Towering nearly three metres, the metal barrier was reinforced in 2017 under the presidency of Donald Trump.

It stretches for more than 1,000km, blocking seasonal migration routes and preventing animals from reaching food, water and mates.

Border lighting frightens nocturnal animals and can confuse migratory birds that navigate by moonlight or starlight.

To prevent the collapse of this delicate ecosystem, conservationists are urging the US and Mexican governments to construct ‘biodiversity corridors’.

This would involve removing parts of the border wall that cause harm to wildlife, and restoring cross-border rivers.

"The development of a large human barrier has repercussions,” says Eamon Harrity, wildlife project manager at the Sky Island Alliance, another conservation group active in the area.

"It's really important that these landscapes are protected and maintained free of wall for animals to move their migration forwards."

Watch: Venezuelan migrants repelled by rubber bullets at US border