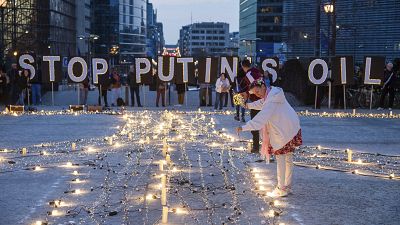 Protestors in Brussels call on EU leaders to impose a full ban on Russian fuels and to hold one minute of silence to honour the victims of war.   -   Copyright  Geert Vanden Wijngaert/Copyright 2022 The Associated Press. All rights reserved
By Rosie Frost  •  Updated: 23/03/2022

The European Union could be about to back a new tax on exceptional profits made by some energy companies that are linked to soaring gas prices.

A draft document, seen by Bloomberg, suggests that a temporary tax on windfall profits could be a “useful source of financing.”

Heads of government are due to debate these measures to help the most vulnerable consumers on Thursday.

The energy crisis means EU gas, coal,nuclear, hydropower and other renewables may generate excess profits of up to €200 billion in 2022, the International Energy Agency (IEA) estimates.

Redistributing these funds to help consumers offset higher energy bills is one of the suggestions in the IEA’s 10 point plan to wean Europe off of Russian oil and gas. It has already been adopted in Italy and Romania in 2022.

Others suggest the windfall tax funds could be put towards renewable energy resources.

“Fossil gas companies have made record profits while people suffered in freezing homes this winter, and now they are sitting on the money we need to fund the transition to a clean energy future,” says Murray Worthy, gas campaign leader at Global Witness.

Worthy adds that EU leaders have a “moral responsibility” to push for a windfall tax on fossil fuel profits and “spend it on a massive build-out of renewables and insulation to end the age of fossil gas for good, and provide affordable, renewable power and heating for everyone.”

Are fossil fuel companies ‘cashing in’ on a crisis?

A number of natural gas pipeline and terminal projects are also being considered by fossil fuel companies in response to the crisis.

Greece, Italy, the Netherlands, Germany, Spain and France have all recently revived gas projects. Without gas to drill for, money is made in Europe by building infrastructure for imported natural gas.

In those places with resources to be drilled, operations are growing in response to the energy crisis. The liquified natural gas and fracking lobbies in the US are pushing for expansion and more exports to fill the gap left by Russian fossil fuels.

In the UK, Shell is reportedly reconsidering its decision to back out of the Cambo oil field. A project that just three months ago was considered unviable is now back on the table due to the urgent situation in Ukraine, Mike Davis, CEO of Global Witness explains.

Governments need to act because these corporations clearly will not.

“The fossil fuel industry has seen no line it won’t cross. From profiting from the destruction of our planet to cashing in on the murder of innocent people, they have shown time and again that their only interest is making money.”

Davis adds that Shell should have seen this crisis as the time to dramatically increase its investment in renewable technologies. Instead, it has doubled down on fossil fuels.

“Governments need to act because these corporations clearly will not.”