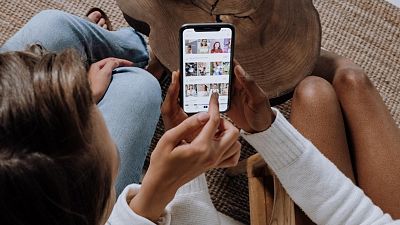 Car brands, airlines and fossil fuel companies are using social media to greenwash their reputations, according to a new investigation from Harvard University.

The report, commissioned by Greenpeace, says its findings show how companies in Europe exploit people’s concerns about the environment to spread disinformation online.

“Social media is the new frontier of climate deception and delay,” says Geoffrey Supran, lead author of the study.

The history of science researcher says that while Europe was experiencing its hottest summer on record, “some of the companies most responsible for global heating stayed silent on social media about the climate crisis.”

He adds that they instead used language and imagery to position themselves as “green, innovative, charitable brands.”

How are companies using social media to greenwash their reputations?

The report looked at more than 2,000 posts from 375 accounts across a wide variety of different social media platforms. They included 12 of the biggest car brands, five of the biggest airlines and five of the largest fossil fuel companies.

Only one in five “green” car adverts analysed actually sold a product - the rest served to present a brand as green.

They found that only one in five “green” car adverts analysed actually sold a product - the rest served to present a brand as green.

One in five adverts from oil, car and airline companies also used sports, fashion or social causes to distract attention away from their core business roles and responsibilities - or ‘misdirection’ as the report calls it.

Two-thirds of posts from these companies focused on “green innovation” in their business operations which the authors say represents a variety of different types of greenwashing.

Only a handful of all posts actually made explicit references to climate change.

How are brands using imagery to greenwash their image?

The report details how female-presenting people, in particular, have been used by these companies to target sales at that demographic and leverage social associations between ‘greenness’ and femininity.

“While this discussion is primarily geared towards the increased use of female-presenting casts in green marketing,” Supran adds, “racial and ethnic minorities report among the very highest levels of environmental concern, so it is reasonable to assume that similar motives may be behind their increased prominence in green messaging too.”

He explains that fossil fuel firms, particularly car companies, use the presence of young and non-binary people to help “legitimise their ‘wokewashing’.”

European oil, auto, and airline industries are subtly yet systematically appropriating the beauty of nature in their social media content to ‘green’ their public image.

Nature too was used in the posts to help shape similar perceptions of brands.

“One of our most startling findings is that European oil, auto, and airline industries are subtly yet systematically appropriating the beauty of nature in their social media content to ‘green’ their public image,” says Silvia Pastorelli, Greenpeace EU climate and energy campaigner.

Pastorelli adds that car brands in particular are far more prolific on social media than airlines and oil companies. This means they have a much larger role in shaping the public narrative on climate, fossil fuels and the energy transition.

“This pervasive and potent public affairs technique has been hiding in plain sight, and it demands greater scrutiny.”

Should there be a ban on fossil fuel advertising?

Researchers say the report confirms that social media is now at the forefront of climate “disinformation and deception”.

Last year, Greenpeace signed a European Citizens’ Initiative petition alongside 40 other organisations calling for laws to ban fossil fuel advertising and sponsorship in the EU.

And this year the IPCC identified the role of public relations and advertising in fueling the climate crisis for the first time.

Some countries have already taken steps to get rid of certain forms of fossil fuel advertising. France recently announced a ban as part of a package of new climate laws. But environmental groups have said it doesn’t go far enough and Greenpeace is calling for a complete ban - just like on adverts for tobacco products.

“This is a systematic greenwashing effort that must be addressed with a legal ban on all fossil fuel advertising and sponsorship across Europe, just as happened with tobacco,” says Pastorelli.

But curbing the greenwashing the report identified on social media could be a lot harder.

It is challenging for governments to ban a specific type of activity on social media, says Cameron Hickey, project director at the Algorithmic Transparency Institute, because it only applies to entities within their jurisdiction.

“Countries and cities have banned types of content and accounts and forced the social media platforms to comply, which proves it is not impossible.”

Hickey adds that the bigger challenge is identifying what constitutes an advert when this is more ambiguous on social media. There are ads which companies pay to place in front of audiences but there is also a case to be made that every communication from a corporation is a form of advertising.

“This creates a much greater challenge for regulating fossil fuel advertising on social media, because that could have the effect of completely banning these companies from leveraging social media to communicate.”