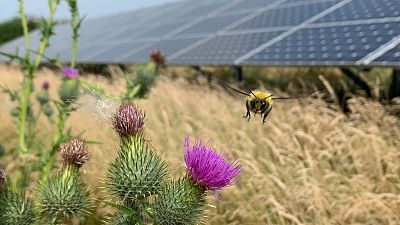 Planting wildflowers around solar panels could make them a home for bees.   -   Copyright  Hollie Blaydes
By Lottie Limb  •  Updated: 14/12/2021

Solar farms could become havens for bees and other pollinators if simple changes were made, new research suggests.

Fields of glinting panels may not look like the most inviting place for wildlife to flourish. But if solar park land is managed as meadows - as opposed to turf grass - it can support four times as many bumblebees.

Researchers at Lancaster University, UK, investigated different scenarios to see if ground-nesting bumblebee populations could be better supported. The pollinators are in drastic decline across Europe - their numbers have fallen by 17 per cent since the early twentieth century.

PhD researcher Hollie Blaydes says, “Our findings provide the first quantitative evidence that solar parks could be used as a conservation tool to support and boost pollinator populations. If they are managed in a way that provides resources [such as wildflowers], solar parks could become valuable bumble bee habitat.”

“Our findings provide the first evidence that solar parks could be used as a conservation tool.”

Farmers would also reap the benefits of these parks upping their floral and nesting offerings.

Simulating different models of bumblebee foraging, the researchers found that large, elongated and resource-rich solar parks could boost bumble bee density up to 1km outside of the parks themselves.

This would bring pollinator services to crops in surrounding agricultural land - which locals could further take advantage of by planting pollinator-dependent plants like basil and courgettes.

Why do solar parks make promising habitats for bees?

It might look like they dominate the land, but sky-facing solar parks only disturb around 5 per cent of the ground.

Large tracts of land are therefore free to serve as bumblebee habitat, says Blaydes. These solar parks are often built in intensively-managed agricultural areas that have decimated bumblebee numbers, so the refuges would be well placed.

With the area of land dedicated to solar power growing across Europe, an intervention is timely.

Solar parks already cover 14,000 hectares in the UK - a total that needs to rise to over 100,000 hectares if the UK is to meet its net zero targets, according to the Climate Change Committee.

That’s a huge amount of land that could be optimised for bees and other vital insects, but a joined-up approach is needed.

What’s next for protecting pollinators?

Business structures may also need a rethink. “Management of solar parks is often outsourced to external companies where contracts are typically around two years long,” explains Blaydes. These frequent changes in ownership “could be challenging when trying to establish and maintain habitats over longer time scales.”

Presenting her research at the Ecology Across Borders conference on 13 December, Blaydes and her team made the case for collecting real-world data at solar parks to better understand the impact of different management styles.

Other important pollinators such as solitary bees, hoverflies, butterflies and moths deserve the same attention if we’re to bring our solar power into harmony with the natural world.