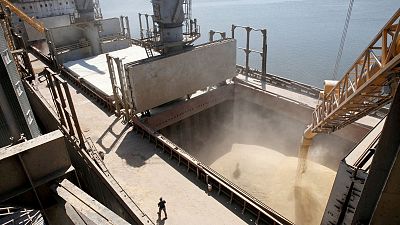 Ukraine is a major exporter of barley grain (pictured here at a dockyard in 2013), as well as wheat, corn and sunflower oil.   -   Copyright  REUTERS/Vincent Mundy
By Lottie Limb  with Reuters - Michelle Nichols  •  Updated: 19/05/2022

The UN is in “intense contact” with Russia, Ukraine and other nations in an effort to stave off a global food crisis.

Russia’s invasion of Ukraine has worsened food insecurity in poorer nations, and could lead to long-term famines if Ukraine’s grain exports are not restored to pre-war levels soon, Secretary-General António Guterres has warned.

Speaking at a food security meeting at the United Nations in New York yesterday (18 May), Guterres said he is hopeful of finding a solution, but there is still a way to go.

“The complex security, economic and financial implications require goodwill on all sides,” he said, appealing to Russia to allow "the safe and secure export of grain stored in Ukrainian ports" and for Russian food and fertilisers to "have full and unrestricted access to world markets."

How important are Ukraine and Russia to global food supplies?

Russia and Ukraine together account for nearly a third of global wheat supplies.

Ukraine is also a major exporter of corn, barley, sunflower oil and rapeseed oil, while Russia and Belarus - which has backed Moscow in its war in Ukraine - account for more than 40 per cent of global exports of potash, a crop nutrient.

The United Nations has said 36 countries count on Russia and Ukraine for more than half of their wheat imports, including some of the poorest and most vulnerable in the world, such as Lebanon, Syria, Yemen, Somalia and Democratic Republic of Congo.

"If you have any heart at all, please open these ports."

UN food chief David Beasley appealed to Russian President Vladimir Putin: "If you have any heart at all, please open these ports." Beasley heads the World Food Programme, which feeds some 125 million people and buys 50 per cent of its grain from Ukraine.

"This is not just about Ukraine. This is about the poorest of the poor who are on the brink of starvation as we speak," Beasley said.

Ukraine used to export most of its goods through seaports but since Russia's invasion on 24 February, it has been forced to export by train or via its small Danube River ports.

There are an estimated 22 million tons of grain sitting in silos in Ukraine right now.

Antony Blinken
US Secretary of State

"There are an estimated 22 million tons of grain sitting in silos in Ukraine right now,” said US Secretary of State Antony Blinken, hosting the meeting. “Food that could immediately go toward helping those in need if it can simply get out of the country.”

He urged Russia to create corridors so that food and other vital supplies can safely leave Ukraine by land or sea.

How has Russia responded to the UN’s appeal?

"The discussions, as far as I know, went well and positive," Nebenzia told reporters on Wednesday, but he signalled that Ukrainian access to international markets was a separate issue.

"We are prepared to do our share. The Ukrainian grain market access, that's another thing," Nebenzia said.

Nebenzia added that while there were no direct sanctions on Russian fertilisers or grains, there had been a chilling effect on shipping, insurance and banking after the United States and others began punishing Russia over what Moscow calls a "special military operation" in Ukraine.

Blinken said it was "false" to blame sanctions because the United States had created exceptions and was working to ensure measures imposed by Washington "are not preventing food or fertiliser from leaving Russia or anywhere else."