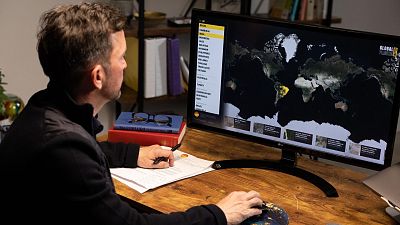 A cutting edge new tool has been created that uses satellites and AI to map thousands of piles of plastic waste from space.

Global Plastic Watch can detect plastic waste sites as small as 5 by 5 metres, creating an interactive “living” map of plastic pollution in near real-time. This free, publicly available tool has been developed by Australian non-profit, the Minderoo Foundation.

The data gathered is believed to be a world-first, providing a historic insight into one of the planet’s most complex environmental challenges - how to stop plastic from flowing into our oceans.

How can we prevent plastic stockpiles from entering the ocean?

Until now, it has been difficult to effectively identify and measure plastic pollution in a standardised way, says Dr Andrew Forrest chairman and co-founder of the Minderoo Foundation.

“Generally, the world has no idea how dangerous plastic waste is to the organic environment, particularly humans.”

Every piece of plastic eventually becomes a nano-plastic that can “mutilate cells” and even make its way into the human brain, Dr Forrest says.

Preventing illegal and legal plastic waste stockpiles from entering the ocean is critical to limiting this harm, he adds. That’s where Global Plastic Watch comes in.

Most of our data about plastic waste comes from models and estimates. Now our understanding is informed by real data that can be used to guide solutions.

The mapping system uses remote satellite imagery from the European Space Agency and AI to determine the size and scale of plastic waste sites. A similar process has been used to map deforestation in recent years but this will be the first time it has been used for plastics.

“Most of our data about plastic waste comes from models and estimates. Now our understanding is informed by real data that can be used to guide solutions,” says Dr Forrest.

So far Global Plastic Watch has identified thousands of waste sites in 25 countries including all of South East Asia and Australia.

The sheer number of previously undocumented plastic piles and their proximity to waterways was surprising, says Dr Fabien Laurier, lead for technology and innovation, and ocean conservation at the Minderoo Foundation.

One in five of the mapped waste sites was within less than 250 metres of waterways that send plastic straight into rivers - and ultimately the ocean.

“We know that land-based leakage contributes up to 91 per cent of the plastic waste that enters the ocean,” Dr Laurier explains, adding that the number of sites discovered by the mapping was much higher than expected.

The high-resolution mapping aims to help authorities identify this leakage and use real data to inform policies that would prevent it.

Indonesia is the fifth highest contributor to ocean plastics

In Indonesia, the government is already working with the Minderoo Foundation to map and manage its waste problem. The country is the world’s fifth-highest contributor to ocean plastics.

“That has enabled us to prioritise areas in need of better waste management policies and actions.”

The country has committed to cutting the amount of plastic that flows into the ocean via its rivers and waterways by 70 per cent in the next five years. Tools like Global Plastic Watch’s interactive map are helping the government develop an evidence-based approach to reaching that goal.