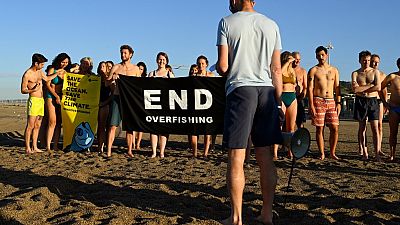 Participants gather and hold a banner on a beach in Marseille to draw the attention of world leaders and protest against the environmental crisis.   -   Copyright  NICOLAS TUCAT / AFP
By Euronews  •  Updated: 07/09/2021

NGOs have called for bolder action to be made to protect imperilled wildlife as they criticise the pace of negotiations at the Marseille global biodiversity conference which kicked off last week.

One of the loudest voices calling for tougher action, the World Wide Fund for Nature (WWF), said the conference is lacking in ambition.

WWF global coordinator Gavin Edwards told Euronews people are now aware that there is a crisis in nature in addition to the climate crisis, and the goal is now "a matter of actually landing an agreement, an agreement that will put the world on a trajectory towards becoming nature positive."

"That is going to require more political will from countries, more engagement from businesses and civil society contributing to and demanding action for change. So I'm hopeful that coming out of Marseille, [...] we'll land something that is ambitious, that will deal with the fact that we're losing too much nature and that is harmful not only to nature, but to civilisation and human development as well," Edwards said.

The WWF global coordinator believes that to attain a nature-positive world, much bolder action and more political will from governments are needed.

"The Paris climate accord is very clear on climate change: 1,5 degrees Celsius is the upper safe limit for temperature. The same applies on nature as well. We have to focus on what the science is saying is necessary: that is the physical science, and then deal with the political science of how to get there and what is possible. And possibility is something that just requires more will," he added.

"Taking small steps is not going to cut it. We're going to lose fish in the oceans. We're going to potentially have more pandemics as well, which have their roots in nature loss. So there's a whole lot more to play for here. This is not the time for baby steps."