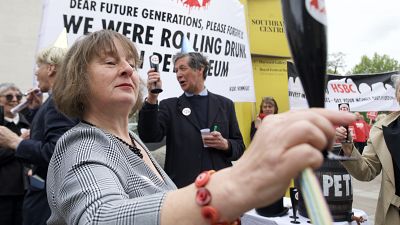 HSBC held its annual general meeting at London’s Southbank Centre on Friday 29 April - but things didn’t go quite to plan.

Around half an hour into the meeting, as the bank’s chairman Mark Tucker was making a speech, members of the audience began to sing.

The audience was surreptitiously made up of members of Extinction Money Rebellion, the financial wing of XR, who sang their own rendition of ABBA’s classic ‘Money, money, money’.

Why are they protesting against HSBC?

In 2021, HSBC invested around €17 billion into the fossil fuel industry. It is the major bank funding Saudi Aramco and Exxonmobil, which ranked first and fourth in the Carbon Majors database of fossil fuel companies responsible for global carbon emissions since 1965.

Then in May 2021, it was leaked that HSBC had stakes in companies which were planning to build 73 new coal power plants.

The Paris Climate Agreement was signed in 2016 and, according to XR Money Rebellion, HSBC has since invested around €125 billion into fossil fuels.

In the most recent IPCC report, we were warned that the flow of funding towards the fossil fuel industry is still far greater than towards adapting to and mitigating the climate crisis.

Is singing an effective form of protest?

As well as the singers inside, performing their own rendition of ABBA’s ‘Money, money, money’, Extinction Money Rebellion had a team protesting outside on London’s South Bank.

We are absolutely living for this

How about:
?Fernandon't fund fossil fuels
?Lay oil your love on me

What have you got @GreenpeaceUK@StopMoneyPipe@NoFossilBanks@bank4future@RAN@SierraClub@standearth@SumOfUs@350Europe@ShareAction ?

Performers dressed as bankers with cigars and champagne flutes full of fake oil and toasted to their financial successes from fossil fuels.

The group also held a large banner with a quote from writer Kurt Vonnegut which read “Dear Future Generations, please forgive us. We were rolling drunk on petroleum.”

Watch the video above to see the XR protest in action.