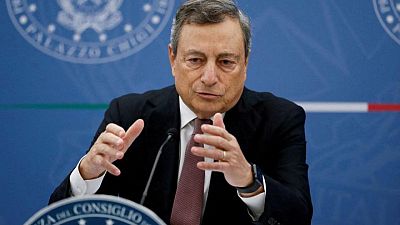 By Angelo Amante and Giuseppe Fonte

ROME – Italian Prime Minister Mario Draghi called on the European Union on Tuesday to tackle surging energy costs, saying it should adapt schemes deployed to handle the COVID-19 epidemic to the impact of the Ukraine conflict.

In an address to the European Parliament in Strasbourg, Draghi said national budgets alone could not finance the spending necessary to uphold sanctions imposed on Russia over its invasion of Ukraine without risking domestic upheaval.

“We need strong and immediate decisions,” Draghi told the Strasbourg assembly, saying energy would be at the heart of the next European leaders’ meeting.

On Monday, Italy unveiled a new stimulus plan worth 14 billion euros ($14.76 billion), on top of over 15 billion already budgeted since January, to soften the blow of rising energy prices to its economy.

Draghi said the EU should extend the scope of its SURE unemployment scheme to help member countries shield their economies from soaring energy prices.

“I am referring to measures to reduce bills, but also to temporary support for lower wages, for example through tax relief,” the former European Central Bank chief said.

He added that for long-term investments in areas such as defence, energy, food and industrial security, the model should be the Next Generation EU, the grant and loans package put in place to foster the recovery from the COVID-19 pandemic.

Draghi – who also proposed a conference to optimise defence investment in Europe – said EU institutions are no longer equipped to face current crises ranging from energy to security, and need overhauling.

“If this means starting a process that will lead to the revision of the (EU) treaties, let us embrace it with courage and confidence.”

Draghi reiterated that Italy would back any energy-related sanctions against Russia, despite its heavy reliance on Russian gas imports, and would take “all necessary” decisions to defend national and European energy security.

“European integration is the best ally we have to face the challenges of history,” he said.