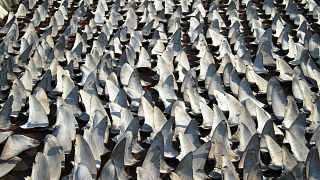 EU countries are fuelling the global shark trade pushing marine species towards extinction, a new study has found. Almost half of the shark fins sold to Asia in 2020 came from European countries.

The International Fund for Animal Welfare (IFAW) looked at customs data over almost two decades from three major trading hubs in Asia. It found that the EU plays a “key role” in the market as both a supplier and trader in the global shark trade.

A total of 188,368 tonnes of shark fin products were imported into Hong Kong, Singapore and Taiwan between 2003 and 2020 - 53,407 tonnes came from the EU. The bloc was responsible for an average of 28 per cent of imports into the Asian market, according to IFAW.

That figure has been growing in recent years too, with EU member states found to be the source of 45 per cent of shark fin related products imported into the region in 2020.

Spain is one of the top exporters in the global fin trade along with Portugal, the Netherlands, France and Italy. It isn’t just products being sent to the Asian market either as Spain, Italy and Greece were found to be primary importers of shark meat from Hong Kong, Singapore and Taiwan too.

As a major player in the global shark trade, the EU has an important responsibility to enact sustainability requirements, says co-author of the report Barbara Slee.

“Taking on such a leadership role would undoubtedly influence other players to do so as well - leading to a better, sustainable future for sharks.”

“Small or large, coastal or high seas, shark species are disappearing, with the piecemeal management efforts to date failing to stop their decline,” Slee adds.

Small or large, coastal or high seas, shark species are disappearing, with the piecemeal management efforts to date failing to stop their decline.

But, in areas where effective management has been put in place, shark populations have been shown to recover. Listing sharks that are traded in the Convention on International Trade in Endangered Species of Wildlife Flora and Fauna (CITES) appendix II would give them greater protection, IFAW says.

Shark finning, where fins are cut off live sharks onboard fishing boats before they are thrown back into the water, is already banned in the EU. Landing and selling whole sharks is still allowed but not for species listed by CITES.

“Global shark declines are driven by international demand for shark fins and meat, coupled with widespread lack of management for both the catch and trade of shark species,” says Stan Shea, co-author of the report and marine programme manager at the BLOOM Association Hong Kong.

While the burden of change is often placed on the countries where shark products are consumed, Shea adds, EU nations with operating fishing fleets involved in the trade are equally complicit.