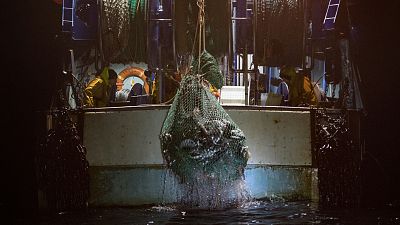 Fishermen pull up their gillnet during a midwater pair trawl on the Gulf of Gascony sea, off the coast of France   -   Copyright  LOIC VENANCE/AFP
By Angela Youngman & Ruth Wright  •  Updated: 02/06/2021

‘Seaspiracy’, the popular Netflix documentary released earlier this year, has made words like ‘bycatch’ and ‘overfishing’ everyday language. Previously technical terms, the film has catapulted these destructive fishing industry practices into the mainstream.

The film shone a light on an industry that has escaped scrutiny for a long time and we’re already seeing its impacts. We’ve heard from many readers who have stopped eating fish as a result of watching the movie.

But the film has been criticised for the onslaught of facts and statistics it throws at viewers. Some found it difficult to really absorb all the information they were presented with.

So here we take a deep dive, pun intended, into what bottom trawling and bycatch, two focuses of ‘Seaspiracy’, truly mean for our oceans.

What is bottom trawling?

Bottom trawling is an industrial fishing method where a huge net with heavy weights is dragged along the sea bed, scooping up everything in its path.

Huge is something of an understatement. As ‘Seaspiracy’ says, “the largest trawl nets are so big that they can swallow whole cathedrals or up to thirteen jumbo jets.”

How does bottom trawling contribute to global warming?

This year saw the publishing of the first-ever study to calculate the carbon cost of bottom trawling. ‘Protecting the global ocean for biodiversity, food and climate’ found that bottom trawling releases as much CO2 as the entire aviation industry.

Keeping carbon where it is stored, rather than releasing it into the atmosphere where it raises global temperatures, is imperative.

As Dr Trisha Atwood, co-author of the report, says, “The ocean floor is the world’s largest carbon storehouse. If we’re to succeed in stopping global warming, we must leave the carbon-rich seabed undisturbed.

“Yet every day, we are trawling the sea floor, depleting its biodiversity and mobilising millennia-old carbon and thus exacerbating climate change.”

The study, produced by a team led by Dr Enric Sala of the National Geographical Society, discovered that bottom trawling produces 1 gigaton of carbon every year.

So, what’s the issue with increased carbon in the oceans? It increases acidification, reduces biodiversity and damages the ocean’s ability to absorb carbon, thereby damaging its ability to act as a crucial store in future.

What can be done to stop bottom trawling?

“In this study, we’ve pioneered a new way to identify the places that – if strongly protected – will boost food production and safeguard marine life, all while reducing carbon emissions,” Dr Sala points out.

“Humanity and the economy will benefit from a healthier ocean and we can realise those benefits quickly if countries work together to protect at least 30 per cent of the ocean by 2030.”

Using an algorithm, the researchers identified that if at least 30 per cent of the ocean was protected, biodiversity would improve, sea life would return and benefits for the climate would follow

They found the areas to prioritise for protection included:

Charles Clover, Executive Director at the Blue Marine Foundation, says studies such as this one are vital.

“The science is clear – destructive fishing is the biggest threat to marine life – and massively accelerating climate change," he says.

"The interests of European citizens lie overwhelmingly in protecting biodiversity and tackling climate change – not in protecting vested interests within the fishing industry. It is time to put in place measures to protect seabed habitats from the Arctic circle to the Mediterranean.”

Bycatch is all the marine life that is incidentally caught up in trawler nets, alongside the target fish. It happens because the nets are so huge and weighted down that marine life has no option but to be dragged along in the net. Most of the species caught in the nets are discarded and thrown back overboard, dead.

The scale of the damage done to Dogger Bank by bottom trawling and industrial fishing has been analysed by Blue Marine Foundation, Client Earth, Marine Conservation Society and the WWF. They found that the area, 100km of the east coast of England, was so severely damaged that it should be a ‘test case’ for the conservation of Europe’s Marine Protected Areas.

As a region, it stores the largest quantity of blue carbon in UK waters. It holds approximately 5.1 million tonnes in the seabed, equivalent to 31,000 return flights from London to Sydney.

The UK, Netherlands and Germany have undertaken a separate study of Dogger Bank, which showed that bottom trawling has resulted in a marine environment dominated by short-lived invertebrates rather than endangered species such as skate and Atlantic Halibut.

The three countries plan to declare 18,765 square kilometres of Dogger Bank a marine protected area, with the UK already planning to introduce a bylaw covering its section in the near future.

‘The worst enemy of successful fisheries is overfishing – not protected areas’

“Some argue that closing areas to fishing hurts fishing interests. But the worst enemy of successful fisheries is overfishing – not protected areas,” says Dr Sala.

Evidence from existing marine protected areas shows that protecting one area increases fish stocks in the waters surrounding it. As an example, warming waters and reduced oxygen led to a major decline in abalone fish in Dogger Bank in 2010. But the survival of highly reproductive abalone in a nearby protected area led to the replenishment of fish stocks throughout the region.

What’s more, catch densities increased by up to 90 per cent within five years. Closing the areas around the Isle of Arran, Isle of Man, Lundy and Skomer to dredging also resulted in a major increase in the number of scallops and lobsters.

By taking action to ban bottom trawling across specific areas like Dogger Bank, it would also safeguard over 80 per cent of habitats for endangered marine species, while ultimately creating the potential to increase fishing catches by over 8m metric tons.

Best of all, it would protect existing and future carbon storage, thereby helping us to avoid total climate breakdown.