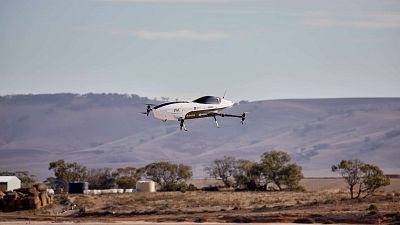 The world's first flying electric race cars have just completed the necessary tests to take off later this year in a series of international races.

The global premiere of these remotely controlled multicopters was meant to take place in 2020, but like many other events, had to be postponed because of the pandemic.

The Airspeeder story began in the summer of 2019 when entrepreneur Matthew Pearson shared his ambition to create the world's first racing series for flying electric cars, as Euronews Green reported previously.

The company in charge of the development, Alauda Aeronautics and its sister company Airspeeder, have just announced that the Alauda Airspeeder Mk3, a four-metre-long multicopter, has taken its first unmanned test flights.

These first flights took place at undisclosed test locations in the deserts of South Australia under the observation of Australia's Civil Aviation Safety Authority (CASA).

These successful tests will allow the organisers to launch the 'Airspeeder EXA' race series later this year at three soon-to-be-revealed international locations.

They promise to work with elite pilots drawn from aviation and motorsport.

Click on the video and watch how these futuristic 'Speeders' fly.