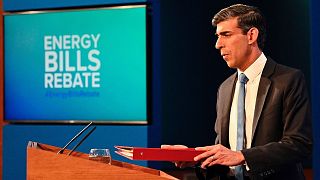 Britain's Chancellor Rishi Sunak holds a press conference in London as it was announced that the energy price cap will rise by a record 54 per cent.   -  Copyright  AP Photo
By Lottie Limb  •  Updated: 03/02/2022

Around 22 million UK households will see their annual energy bill go up by as much as £700 (€840) next month, Ofgem announced today.

The energy regulator has raised the price cap - the maximum amount suppliers can charge per unit of energy - by a staggering 54 per cent to reflect the record rise in global gas prices over the last six months.

The news comes as Shell posted its highest quarterly profits in eight years - which NGO Global Witness has called “a slap in the face” for Europe’s energy poor.

Britain’s poorest households now face a stark choice between heating and eating, with the “once in a 30-year event” in the energy market fuelling a wider cost of living crisis.

Aside from the unequal impact, bills will vary across the UK: the price cap lift applies to those on default, variable tariffs, and it will soar by £708 to £2,107 for pre-payment customers.

Those on fixed-term energy tariffs won’t be affected, and there’s another notable exception: green energy providers. Since 2019, Ofgem has made a handful of renewable energy suppliers exempt from the threshold.

Ecotricity, Good Energy and Green Energy UK have been able to charge customers above the limit because the money goes towards producing renewable energy.

And what are the wider shifts that need to occur for people and planet to make it through the spiralling energy crisis? We spoke to energy companies and experts to find out.

British energy company Ecotricity was able to adjust its prices before other UK suppliers, explains founder Dale Vince, putting bills up to roughly the same amount as the price cap.

“The people who are with us are with us for a reason, it's not related to price it’s about the green outcome,” he says.

Setting their own prices has enabled Ecotricity to avoid the fate of around 27 energy companies that have gone bust in the last several months. Popular supplier Bulb was the first to be placed into special administration in November 2021; although its focus is on renewable energy, it didn’t meet the conditions for Ofgem’s price cap exemption and the regulator barred it from raising prices.

Green Energy UK, one of the other three companies given a derogation, tells Euronews Green it has never charged its standard variable tariff (SVT) customers above the price cap. It it is awaiting more information from Ofgem to determine its future prices.

While Good Energy says it raised its SVT to reflect the true cost of supplying energy in January, so it is already a similar level to where the cap is now rising to.

Wind and solar power were already cheaper than fossil gas for generating electricity before the gas crisis hit, according to analysis from climate and energy think tank Ember, and have become even more cost-competitive since.

So for companies like Ecotricity, that provide 100 per cent renewable electricity - and generate 20 per cent of it themselves - why do soaring global gas prices matter?

This is because of the way the wholesale market for gas and electricity works, where energy is traded between generators and suppliers at one rate. It’s influenced by a number of global factors; most recently, the particularly cold winter of 2020-2021 and China’s demand for liquefied natural gas - both serving to pinch gas supplies.

Gas prices in turn drive up electricity prices, because of the big role of gas-fired power stations.

But if there is more cheap renewable energy in the system, then less power will be generated from much more expensive coal and gas plants, explains senior analyst at Ember Sarah Brown.

“This reduces the wholesale electricity prices that set the price caps and, consequently, reduces consumer bills,” she adds. “Renewable energy sources are also domestic assets and, therefore, are not exposed to global energy price surges or political risks.”

So what needs to change?

With energy prices soaring to unfeasible levels for customers across the board, it’s clear that policies need to change.

The profits of oil and gas giants Shell and BP are particularly hard to swallow in this context. The former racked up $21 billion last year; while collectively they made around £900-a-second in the last three months.

“The fossil gas crisis is making Shell’s executives and shareholders eye-wateringly rich, and is a slap in the face for the millions of people across Europe experiencing energy poverty,” says Murray Worthy, gas campaign leader at Global Witness.

“This shows how broken our energy system is, pouring money into the pockets of the companies fuelling the climate crisis while forcing families to choose between heating and eating."

Labour are calling for a windfall tax on North Sea oil and gas producers, including Shell, to ease the burden on UK households.

Vince adds, “The government says we won't have a windfall tax on the North Sea [where around half of British gas comes from] because North Sea operators are struggling - struggling with what you have to say? Holding all of that money?”

As a VAT cut on energy bills was ruled out by the UK Chancellor Rishi Sunak, some commentators noted that a specific reason Boris Johnson and Vote Leave campaigners gave for Brexit was the power to cut VAT.

Even as the EU announced yesterday that gas and nuclear will be included in its ‘sustainable’ taxonomy, green energy companies and experts agree that the way out of the energy crisis lies with phasing out fossil fuels and embracing renewables.

“We have to stop burning fossil fuels anyway,” says Vince, “We know that, we don't have a future if we don’t.”