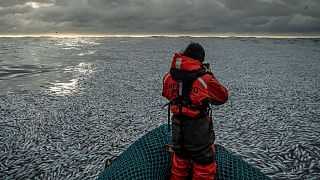 A floating carpet of blue whiting off the French coast on the Atlantic Ocean.   -   Copyright  Rodolphe Villevieille/ Sea Shepherd
By Doloresz Katanich  with Reuters  •  Updated: 21/02/2022

The world's second-biggest fishing vessel has shed over 100,000 dead fish into the Atlantic Ocean off the coast of France.

Campaign group Sea Shepherd France shared shocking images of tens of thousands of dead fish floating on the ocean. The footage shows a dense layer of blue whiting, a sub-species of cod that is used by the industry to mass-produce fish fingers, fish oil and meal.

"What we filmed yesterday is a huge patch of what we estimate to be about 100,000 fish, dead fish, that have been thrown overboard by the Margiris (super trawler)," says head of Sea Shepherd France Lamya Essemlali.

The Margiris is the second-largest super trawler in the world. The 9,500-tonne vessel is bigger than a US destroyer.

Trawlers like the Margiris use drag nets that can measure over a kilometre in length and process the fish in on-board factories - a practice heavily criticised by environmentalists.

The method results in the death of many unintentionally caught marine creatures, including endangered species, and destroys the habitats they rely on.

Some are even claiming that the super trawler responsible for the enormous spill is now being allowed to fish in Scotland, fearing a similar incident could happen again.

One Twitter user posted screenshots of the exact location of the Margiris.

BREAKING NEWS: The super trawler responsible for a massive fish spill off the coast of France is being allowed to fish in Scotland by @NicolaSturgeon@theSNP@BorisJohnson@Conservatives#SuperTrawler#Margiris#Ecocide#ClimateCrisis#OceanDestruction#UKGovernment#Scotlandpic.twitter.com/AZrYjZlnCa

The fishing industry group PFA, which represents the vessel's owner, issued a statement in which it took the responsibility for the "accident".

"We would like to clarify that around 5.50 am on 3 February 2022, an amount of blue whiting was involuntarily released into the sea from the Margiris vessel, due to a rupture in the cod-end part of its net," the company says.

PFA also added that the rupture "was caused by the unexpectedly large size of the fish caught". The ship can catch around 250 tonnes of fish each day in its nets which are 600 metres long and 200 metres wide.

The company claims that blue whiting is their target species so the fish found was not bycatch. It adds that "the lost fish will be deducted from the vessel’s quota" or the amount the fishing vessel is permitted to catch.

Sea Shepherd France doubts the incident was an accident and claims serious regulations are needed to prevent such events in the future.

France's Maritime Minister Annick Girardin called the images of the dead fish "shocking" and said she had asked the country's national fishing surveillance authority to launch an investigation into the accident.

Watch the video above to learn more about this incident.