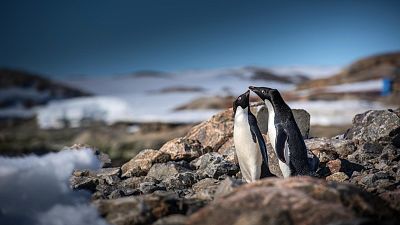 The Adélie is the smallest and most widespread species of penguin in Antarctica   -   Copyright  Getty Images
By Ben Anthony Horton  with Reuters Connect  •  Updated: 22/01/2022

It might sound like a dream job, but for these scientists, counting penguin nests in Antarctica is essential work.

“Although we're really far away at the bottom of the world, we're on the frontlines of climate change," says Michael Wethington, a PhD candidate from Stony Brook University, USA.

Alongside colleague and polar ecologist Alex Borowicz, Wethington is investigating the impact of climate change on Antarctica's penguin populations. The pair have uncovered mixed results.

The Adélie is Antarctica’s smallest and most common penguin, with an estimated population of over 7.5 million.

This species with “Tuxedo-like” markings thrives in areas that are inundated with sea ice, making Antarctica a perfect location for the flightless bird.

But with the polar region now losing six times more ice than it was in the 1980s, Adélie populations have fallen by more than 65 per cent in the past 25 years.

While rising temperatures are causing Adélie populations to decline, this isn’t the case for all of Antarctica’s penguins.

"The other species that we are really interested in are gentoo penguins,” says Wethington.

“Gentoo penguins have a bright orange-red beak, and a really cute white patch on the top of their heads. They're sweet as a button, and just wonderful to work around."

According to the pair’s research, rising temperatures are resulting in increasing - not decreasing - gentoo populations.

"They're more tolerant to warmer conditions that lack heavy sea ice. Here we actually have a species that, in the face of climate change and a warming region of Antarctica, are dramatically increasing."

This was not the only positive news to come from their Antarctic expedition either.

While navigating the freezing waters of the polar peninsula, the researchers discovered a new gentoo penguin colony on Andersson Island. It is one of the southernmost breeding grounds ever reported for this species.

For Wethington, this is yet more incentive to establish a conservation area in the region.

“While we still have penguins existing and not going extinct as a result of climate change, this gives us a really unique opportunity to establish marine protected areas, crucial for preserving and conserving the species around the planet.”

Watch the video above to see Antarctica’s penguin population.