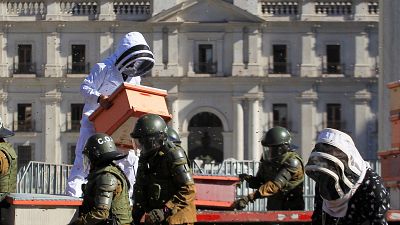 Beekeepers who demanded government measures to face the persistent drought take part in a protest with honeycombs full of bees in front of Chilean Presidential Palace   -   Copyright  STRINGER/REUTERS
By Nichola Daunton  •  Updated: 05/01/2022

Chile’s capital was a hive of activity on Monday during a demonstration outside the Presidential Palace in Santiago.

Seven police officers were stung, as beekeepers, some wearing full bee suits, brought 60 hives to the capital, containing around 10,000 bees. The protestors demanded government action on declining bee numbers and hives were used to block the road outside of the palace to prevent police from intervening.

Chile has been experiencing a megadrought since 2010, which the apiarists say is leading to the death of bee colonies and affecting their livelihoods.

What do the protesters want?

The demonstrators say the drought and extensive water shortages are affecting bee food sources, including crops and flowers.

“Bees are dying, bees are important worldwide, there would be no life if bees died,” one protester told reporters.

the beekeepers want the Chilean government to raise honey prices or provide subsidies to farmers.

In order to protect them from more financial losses, the beekeepers want the Chilean government to raise honey prices or provide subsidies to farmers.

Officials from the Ministry of Agriculture said they are also concerned about the country’s prolonged drought, and that they are already providing aid to communities experiencing water shortages.

Many of the bees took to the air during the protest, which led to concern from passersby.

"It is dangerous for people who are allergic because it can cause death,” one local told Reuters.

Seven Carabiniers (police officers) were strung while removing the hives and were taken to hospital.

What is a ‘megadrought’?

A megadrought is a period of extreme dryness, which in some cases, can last for decades. The Chilean megadrought began in 2010 and has led to severe water shortages in the country.

According to a study from the American Meteorological Society, the drought is partly the result of climate change.

The report, released in August 2021, states that upper ocean warming in the south Pacific - known as the ‘Southern Blob’ - directly contributes to the Chilean megadrought. By heating the air around it, this patch of unusually warm water is pushing weather systems, including essential rain, away from Southern America towards Antarctica.

The severe lack of rainfall is affecting Chile’s mining industry, as well as its central wine growing region.

The severe lack of rainfall is affecting Chile’s mining industry, as well as its central wine growing region. Santiago experienced just 0.06mm of precipitation in the winter month of July 2021, the lowest amount in 72 years

Are bee numbers declining because of the drought?

Chile is an extremely biodiverse country, and to date 464 bee species have been documented.

The drought has caused bee populations to decline though, as flowers wither before they are able to collect the nectar they need to survive.

This has had a knock-on effect on bee farmers and the wider agricultural industry, as honey bees pollinate many of the country’s export crops - including avocados, apples and almonds.

The food sector is one of Chile’s most important export industries, worth $34 billion (€30 billion) annually.