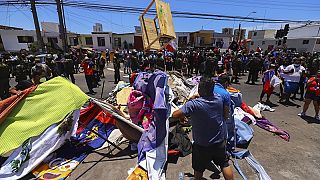 The protest took place in the city of Iquique, just over a 1,600 km north of the capital Santiago.

The demonstration brought together more than 4,000 people, according to Chilean police.

During the march, some protesters violently destroyed tents of Venezuelan migrants in a camp near the beach.

Police officers shielded a group of migrants sitting on the beach, as protesters confronted them.

In recent years, Iquique has been overwhelmed by the mass arrival of migrants through the desert border with Bolivia, where hundreds of people pass through daily without any checks.

The Tarapacá (a region in Chile) prosecutor, Raúl Arancibia, warned in a report this week of the emergence of extremely violent criminal gangs.

According to the report homicides in the region grew by 183% in the last year, to the point of registering one every 48 hours.

Most of the migrants who arrive are Venezuelans, but also Colombians, Haitians, Bolivians and Peruvians.