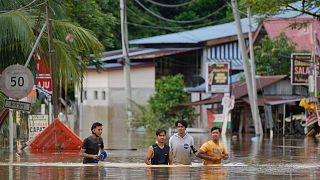 Malaysia is urging the UN to release climate adaptation funds, amid deadly floods that have killed at least 48 people and displaced tens of thousands.

Since 18 December, torrential rain has brought the worst floods Malaysia has seen in decades, with deaths across eight states and nearly 70,000 people forced to flee their homes.

Now the country's environment ministry is seeking $3 million (€2.7 million) from the UN Green Climate Fund (GCF) to develop a national plan to adapt to climate change. It is the first time Malaysia has sought any money for climate adaptation - which refers to the policy changes needed to respond to current and future impacts.

The funds requested pale in comparison to the 9.8 billion ringgit (€2.06 billion) that Malaysia has already set aside for flood mitigation projects such as building water barriers, catchment areas, and deepening rivers. But experts say the National Adaptation Plan will likely cost much more.

A draft adaptation plan should examine the interaction of flooding or droughts on food security and crop yields and the need for energy efficient healthcare services with strong communication systems, she added.

Why is Malaysia prone to severe flooding?

Malaysia typically has flooding on its eastern coasts that are exposed to the northeast monsoon between October and March.

But authorities were caught off-guard by unusually heavy rainfall and flooding this month in highly-populated urban areas in its western and central regions, which some experts say were worsened by poor drainage and overdevelopment.

Adding these incredible images from the flooding around Dataran Merdeka and Masjid Jamek to the photos in this old tweet with pictures from the KL floods of 1926 and 1971. https://t.co/NbdwaubhuNpic.twitter.com/zVOljkjcKB

The government has come under fire for being slow to respond to the ‘once in a 100 year flood’.

In response to questions sent to the Environment and Water Ministry on 20 December on Malaysia's approach to climate adaptation, Secretary-General Zaini Ujang replied that the ministry will request the GCF funds to help develop a National Adaptation Plan by the end of next year.

The plan will focus on areas such as water, agricultural, and food security, public health, forestry, and infrastructure, Zaini said in a written response.

"The ministry also has long-term plans to request for climate funds that can assist in implementing programs addressing the impact of climate change," he said.

Zaini did not give specific details on the adaptation plan, or how much the government would need to implement it.