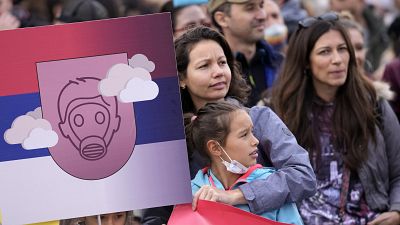 Thousands of environmental demonstrators took to the streets of Belgrade on Sunday to urge the Serbian government to change its attitude towards environmental issues and start applying the law against the biggest polluters.

The latest demonstration follows a day after clashes erupted between police, environmental groups, and anti-government demonstrators.

On Saturday, protesters had blocked roads and bridges to protest against a project which they say favours foreign investors – specifically the Anglo-Australian mining giant Rio Tinto, which wants to exploit lithium in the country.

For its part, Rio Tinto says the project will be in line with the highest environmental standards.

Bojan Simisic, a member of Eko Straža, and one of the organisers of the demonstration said that the aim was to "push the institutions in Serbia to make a change".

"The European Environment Agency’s report says that (pollution-related) mortality rate in Serbia is the biggest in Europe, and Belgrade is Europe's most polluted big city," revealed Simisic.

"At least 15 towns in Serbia are more polluted than the most polluted town in the EU. They (the Serbian government) led us to this stage. 15 000 people died because of the pollution. This means 50 deaths per day, which is more than from COVID-19. And we say nothing and do nothing about that," he went on.

Serbia is one of the most polluted countries in Europe, but public protests have gained attention only recently, with activists accusing the authorities of allowing foreign investors – mostly from China – to cause further damage to the environment.

Their main demands are for the Environmental Protection Agency to return the upper limit of the air quality index category for PM particles to previously valid values – from 55 to 44 micrograms per cubic metre.

They also called for the purchased device for air purification to be redirected from state and local institutions to kindergartens, schools and hospitals, and that the sale of inadequate energy sources for household fireplaces be banned.