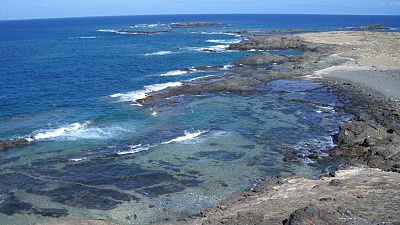 In the waters of the Atlantic Ocean, Europe possesses one of the world's best-preserved treasures.

The Selvagens Islands Nature Reserve, created 50 years ago in Portugal’s Madeira archipelago, is home to a unique ecosystem. A newly adopted legal framework makes it the largest protected marine area in Europe and the North Atlantic.

"Because it permits an ecological response while supporting the associated economic activity. But we’ve had great difficulty establishing total protection areas, and that is why the Selvagens area, despite being only 2677km2 - which may seem a lot, but in the ocean, it’s not -- is the largest in Europe, because in fact, Europe has been delaying these measures".

The purpose of establishing marine protected areas is to allow the ecosystem to recover and renew itself.

Despite the short-term loss of fishing waters, researchers argue that in the long term, everyone wins, as the value of the fish is enhanced -- attracting scientific and informed tourism.

"If we don't establish protection areas," warns Gonçalves, "we will continue to lose resources, so fishing will lose, just by carrying on as at present. The second important fact is that what science shows us is that these areas can reverse their losses and so through these valorisation mechanisms, the economic value of fishing ends up being enhanced."

The European Biodiversity Strategy sets out that by the end of the decade, the European Union should have 30% of its seas classified as protected areas. But by 2020 only 10% of coastal and marine areas had obtained this protection.

This new legal framework, approved by the Regional Government of Madeira with technical and scientific support from the Oceano Azul Foundation, the National Geographic Society and the Waitt Institute, is one step towards achieving the EU's goals.