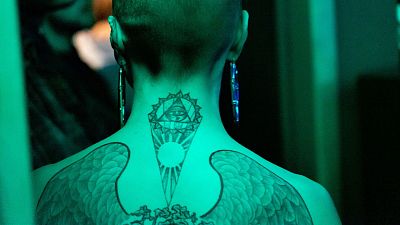 When it comes to England’s attempt at going green, in the rush to become carbon neutral by 2030, COVID may have set the country back years. Our reliance on single-use PPE has led to a severe waste crisis that has added masks, empty sanitiser bottles and plastic testing kits to already full hazard waste sites.

University of Denmark researchers warn that every minute of the day we throw away three million masks that end up as potentially toxic micro and nano-plastics in our environment.

While COVID may have caught us all out when it came to sourcing better options for PPE, some industries are getting it right. One industry, in particular, is an unlikely source of environmental inspiration, the tattoo industry.

A green tattoo parlour cutting down on plastic

Lucy Frost is a tattoo artist and founder of Green House Tattoo Studio in Wokingham, England. She opened Greenhouse Tattoo Supplies after becoming alarmed by the amount of single-use plastic in the industry.

“I wanted to open a studio that was in line with my values,” she tells Euronews Green. When I started to do this, I realised there weren’t any alternatives for a lot of the products. There wasn’t even anything you could take from other sources, like food, as they were all the wrong sizes.”

She adds, “I had three options: either bury my head in the sand and go back to tattooing until someone else did something about it. Quit tattooing all together or find an alternative. I wanted to do something about it so I could carry on doing something I love but in a way that didn’t feel guilty.”

I wanted to do something about it so I could carry on doing what I love, in a way that didn’t feel guilty.

The result is Green House Supplies offer easy swaps for everyday hygiene such as their entirely plant-based ink caps. The material used is polylactic acid, a unique bio-based material from plants instead of fossil fuels.

The manufacturing process shows a significant reduction in greenhouse gas emissions compared to materials such as polystyrene.

The supplies company highlights that it uses approximately 80 per cent less greenhouse gas and 52 per cent less energy in the process.

But is sustainability always accessible?

Lucy explains that tattoo artists have been receptive towards making a change for the better, for quite a while now.

“Those who have been in the industry longer have gotten used to using different products. If you are stuck in a groove where you are an artist who is used to certain things then changing can be difficult also depending on where you are, you can’t always access these things.”

She adds, “It depends on how much money you spend on your equipment. Some people are going to buy cheaply made options that are mass-produced in bulk so it's more expensive than those. With Green House, it's an ethical business that is about people before profit so we are a lot cheaper than other eco-products that have come out since. I have to cover costs and make money but I’ve kept the price as low as possible.”

I have to cover costs and make money but I’ve kept the price as low as possible.

While Green House Supplies offer alternatives for a lot of different tattoo items, she does acknowledge that some things are more difficult.

Making the switch is worthwhile

Alan Alred is an artist at Black Hope Tattoo in Colchester, Essex. He switched to environmental supplies such as ink caps, clip cord sleeves and machine bags made from materials such as cassava, corn starch, sugar cane and beets. The studio has also introduced a recycling system where possible.

He explains what prompted him to make the decision.

“I tried to cut down on a lot of single-use plastics in my home life and recycled as much as I could. It made sense to try to do the same at work.”

Alan continues, “as a tattooist, my top priority is the client's health. The tattoo is obviously important but working in a way that's as clean as possible is key. A lot of the items we use every day in our setups are single-use to avoid any cross-contamination between clients. So within the past year during the pandemic, when we have been able to work, masks have added to the amount of waste produced.”

He says that he feels better knowing he is not contributing to environmental pollution as much as others.

“Knowing that we're not adding to a problem makes the switch over feel worthwhile.”

Vegan inks are the way forward

As well as making a switch to plant-based materials, some artists have started cruelty-free studios offering vegan inks. Tattooing is often seen as a spiritual process which doesn’t fit well with harming nature or animals.

Hannya Jayne, a tattoo artist from Songbird Tattoo Studio in Exeter made the switch to veganism after being vegetarian for years. She says clients will seek out vegan studios but it doesn’t make any difference to the business.

“I would say there are only benefits to being vegan-friendly. No harm comes to another being as a result of the products and some customers seek out vegan tattoo artists specifically. I’ve noticed that some customers get in touch to ask about the inks.

Many are unaware that tattoo inks can contain gelatine as a binding agent, glycerin, bone char to increase pigment and also insect parts.

Surprisingly, tattoo inks can contain gelatine as a binding agent, glycerin, bone char to increase pigment and also insect parts. According to PETA, Bone char, which is also used in sugar, is made from heating the bones of cattle imported from Afghanistan, Argentina, India, and Pakistan. The less reliant we become on farming animals or importing ingredients that contribute to the strain on the environment by using plant alternatives, the better.

Inks can often be made using heavy metals such as titanium oxide. So vegan or organic inks can be a safer, less toxic alternative - especially in the body - and if pots are discarded they can leak into the ground. It is worth asking a studio before you book if they use vegan or organic, metal-free, inks.

Then there is aftercare to consider. Most tattoo aftercare products come in plastic containers which are not designed to be recycled after use. Few companies consider using materials such as glass. They fall into the personal care industry as they are often moisturisers, balms and lotions.

Euromonitor International estimated that in 2018, in the US only, 7.9 billion units of beauty and personal care products were created. This plastic use is something the vegan community are fighting hard to combat through glass.

Hanya explains: “Although the inks may be vegan, it doesn’t mean the other products will be. Some inks do not always list their cruelty-free status on the bottle so I have to contact the company for confirmation. Cleaning products are much more difficult to source as they are commonly tested on animals but they are out there.

“I use eco-friendly products where possible as plastic is causing so much damage to plants and wildlife.”