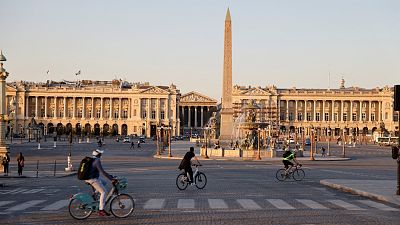 Mayor Hidalgo, who has been called 'the greenest mayor of Paris', said ‘Plan Velo: Act 2’ includes thousands of new bike stands and more cycle paths. The improvements will be made over the next four years.

As of 2021, Paris had more than 1,000km of safe cycle paths including around 52km of “coronapistes.” These were temporarily introduced during the pandemic but have now been made permanent.

Paris has reported that in 2020 bike thefts increased by seven per cent and around 80 per cent of people who don’t cycle say fear of their bike being stolen is their number one worry.

Mayor Hidalgo was elected for a second term in June 2020 after introducing a number of pro-cycling and pedestrian-friendly measures to the city. Paris has already spent €150 million on an initial bike plan that was praised as the start of a “revolution” for the city.

Ever since 2015, Paris has held a “car-free day” where most of the traffic is removed from its busy centre. Thoroughfares including the Champs-Élysées avenue are instead filled with walkers and cyclists. The annual event is intended to curb vehicle use and pollution in Paris.