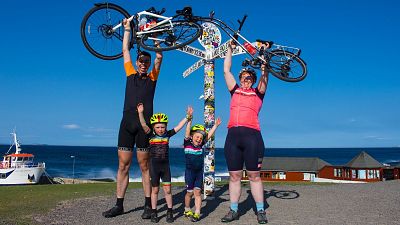 In 2018 Katie Jones was on maternity leave from her job as a solicitor and pregnant with her fourth child. It was then that her husband Tom asked if she wanted to cycle from Lands End to John O’Groats with their two young daughters. She said yes.

“We were enjoying what for many families is quite a short period where you get to be at home with your children.

“We just wanted to make the most of it.”

Both keen cyclists, the pair had purchased a bike trailer back in 2010 for their infant son, with no idea where it would lead.

Since then the four children - Thomas Ivor, Ruth, Rhoda and baby Robert - have all become proficient riders themselves. The Family ByCycle, as they’re known, have travelled the UK and abroad, visiting France, Denmark and California. They’ve become part of the adventurer community, speaking at events and enjoying the open road.

“We thought the trailer when we bought it was quite an expensive extravagance but it turned out to be the cheapest bit of parenting equipment we’ve had,” says Tom.

Their active lifestyle truly gives a new meaning to the phrase ‘keeping up with the Joneses’, but you have to wonder, why?

“Frankly, human paced travel is better for all of us to understand where we’re going and what’s around us. I think the bike gives you just the right pace to be able to see the world, to absorb it, to appreciate it and just be part of it for a moment” says Tom.

“It’s about having an understanding of our place in the world.”

Adamant that they travel light and don’t plan their trips any more than is strictly necessary, Tom and Katie say their explorations have given the children a hands on knowledge of geography, history and even politics.

“We went through the Scottish Outer Hebrides during the run up to the Scottish independence referendum and we were teaching our seven-year-old about why it says ‘yes’ on all the rocks.”

Ruth, aged seven, and her six-year-old sister Rhoda have maps all over the house that they use to plot their next adventures. Ruth explains that she understands the unique benefits cycling can bring her.

Both the girls stay in touch with their friends from the adventure community. They’ve met a lot of people on the road or at events the Joneses have been invited to speak at. People that Tom hopes will inspire them further.

“It’s a locus point on which they can hang their own thoughts, aspirations and ideas and that’s where it grows from,” he says.

Tom and Katie are keen to spread the transformative benefits of cycling beyond the bounds of their family too and have been active in their local community setting up road safety initiatives.

In 2018 Rhoda - who holds the world record holder for the youngest person to cycle from Lands End to John O’Groats - went viral after Tom posted a video of her giving the thumbs up to a lorry driver who did a perfect wide pass on a road on the Scottish borders.

Good road craft is something which is very important to the family and they are keen to end a ‘cars only’ mindset. They say that cycling is only dangerous when proper etiquette is not observed.

Having roads that are fit for everyone for people of different abilities to participate is the biggest gift that we can give to our children.

“When you make that decision about overtaking someone on a bicycle, you are not taking your life in your hands but you are causing them to take theirs in their hands” Tom notes.

“We have to look at making good roadcraft aspirational for everybody.

“We can do all sorts of things with children at a very young age and that sense of freedom, that emancipation in many regards to me is the biggest gift that we as a society are withholding from our children at the moment.

“Having roads that are fit for everyone for people of different abilities to participate is the biggest gift that we can give to our children.

“It isn’t the ability to ride a bike because all children have that. It's a safe place to do it.”

As well as benefits to their family life Tom believes cycling has a key role to play in local economies.

“That journey up through the highlands to Inverness, families could be doing that in the way that they do on other cycle routes throughout Europe.

“You’ve got the Tarka trail down in Devon where there are huge usage figures and where small businesses and communities along that route are thriving.

“A major part of their prosperity comes from bringing tourists in that won’t just drive through.”

In addition to tourism, Katie is keen to point out that cycling benefits struggling town centres as well.

“People who come on foot and cycle into town centres spend longer there and are more active contributors to the local economy.

“The more investment we bring in, the more attractive they become for other people to come and visit because nobody wants to visit a car park.”

It is the independence which their adventurous and active lifestyle has bestowed on them that is most important to the Family ByCycle and they are keen to share that experience with the world.

“We want to get into mainstream, general, everyday people’s understanding that we’re not special.

“Most children could cycle from Lands End to John O’Groats on a trailer bike aged four or five if people believed it was possible.

“This is within the reach of a lot of us and it’s given us a lot of joy and we want to share it.”