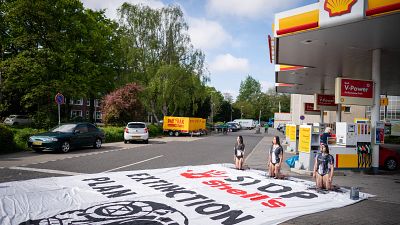 Protestors covered in black paint take part in an action called by global environmental movement Extinction Rebellion, at a Shell gas station in The Hague.   -   Copyright  BART MAAT/AFP
The opinions expressed in this article are those of the author and do not represent in any way the editorial position of Euronews.
By Johnny White  •  Updated: 08/06/2021

ClientEarth lawyer Johnny White gives us his take on the verdict of the Shell climate case. ClientEarth is an environmental charity with a unique approach - using the law to create powerful change that protects life on Earth.

Last week a Dutch court ruled that one of the world’s biggest oil companies, Royal Dutch Shell, must reduce its greenhouse gas emissions by almost half in the next nine years.

It’s no exaggeration to say this landmark verdict, which linked the need for the fossil fuel company to decarbonise to climate science and human rights, is a watershed moment for corporate climate accountability.

The case, brought by Friends of the Earth Netherlands and over 17,000 Dutch citizens, established that Shell was in breach of its duty of care under the Dutch Civil Code, informed by its human rights responsibilities, by contributing dangerously to climate change.

This has illuminated new legal pathways to take action against any high-emitting company - not only those producing fossil fuels - which is harming the environment and threatening human rights through their climate-damaging business activities.

What’s more, the Dutch court’s reasoning and framework could in principle be readily replicated beyond the Netherlands to target more polluters, in other countries, that are putting profits before people’s lives.

The reason for this is that the verdict set several important precedents.

First, Shell was ordered to cut its emissions, including those from the highly polluting products it sells, in line with the global emissions pathway for meeting the 1.5°C temperature limit set out in the Paris Agreement.

That applies to the entire global conglomerate, not just its Dutch operations, and is grounded in the best available science, making clear that “net zero means net zero”.

Second, the court found that Shell’s existing climate policy – its Energy Transition Strategy – lagged behind what is needed to achieve global climate goals and therefore disregarded its responsibilities.

This decision will force the fossil fuel firm to move faster than its existing ‘ambitions’ and those of its competitors, but should also serve as a stark warning for any corporate polluter that has a grossly deficient strategy to lessen its climate impact.

Third, Shell’s inadequate targets to reduce its greenhouse gas emissions were considered to constitute a breach of its legal duty of care towards Dutch citizens.

To come to this conclusion, judges leaned heavily on the UN Guiding Principles on Business and Human Rights – global standards that require companies all over the world to identify, prevent, and address human rights impacts linked to their businesses.

What this made clear is that it’s not good enough for firms to focus on financial and business risks alone; they must act on their real-world environmental and social impacts, irrespective of the bottom line, or risk significant legal consequences.

Ultimately, by ordering Shell to bring its emissions reduction targets in line with those set out in the Paris Agreement, the court’s judgment showed that the global climate pact has teeth – not just for governments, but for companies too.

The ruling has implications for the requirements of corporate and financial law.

It makes clear that compliance with national legislation and weak, hedged voluntary commitments cannot absolve a company of the risk of liability and court action.

And, critically, it confirmed the relevance of climate science, international climate law and business responsibility for human rights to corporate liability.

These universal principles will be found in further corporate climate challenges across the world.

Litigators are now armed with new legal tools globally to hold high-emitting companies to account. Big polluters should be looking again at their plans, and over their shoulder.