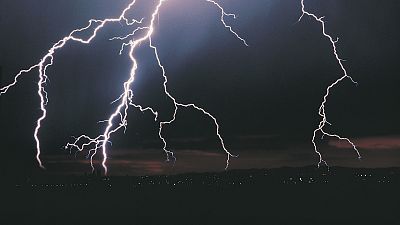 Plasma guns might sound like something out of a sci-fi film, but this space age technology could be coming to a farm near you.

A Norwegian firm has designed a revolutionary new way to fire artificial lightning at cow dung. Research and tests on Holly Head Farm in Berkshire, England, show that firing plasma at cow poo reduces methane emissions by 99 per cent.

The artificial rays also reduce levels of ammonia, another potent cow emission, by 90 per cent.

How does artificial lightning work?

Created by Norwegian firm N2 Applied, The N2 Unit is a large piece of machinery into which cow slurry (a mixture of manure and water) is fed. The unit fixes nitrogen from the air (a process where naturally occurring nitrogen combines with other elements to create more reactive nitrogen) by firing a bolt of plasma at the slurry, which splits the nitrogen and oxygen atoms.

The nitrogen oxide atoms are then absorbed by the slurry, which stabilises the ammonium and stops it releasing, while also eliminating methane loss.

This leaves the slurry packed full of nitrogen, one of the essential nutrients for healthy soil. It can then be spread on fields to help boost crop growth and protect soil fertility.

Cutting down on farmyard ammonia has the knock-on effect of reducing air pollution in cities too.

Due to its prevalence, drifts of air-borne ammonia travel on the wind to cities, where they bind to air particulates from car tyres, exhaust pipes and household gas boilers.

With air pollution in the UK alone responsible for 40,000 premature deaths a year, reducing ammonia emissions on farms is a step in the right direction.

Who pays for this technology?

While farmers could save money on fertiliser due to the nitrogen in the slurry, who will pay for the plasma process?

The UK government has committed to reducing ammonia emissions under the Gothenburg Protocol and the National Emissions Ceiling Regulations, with a commitment to reduce emissions by 16 per cent by 2030, based on 2005 levels.

Whether there will be government subsidies to pay for the technology needed for plasma fixing and other emission-busting schemes, is yet to be announced.

When combined with research carried out in Sweden that reduces the methane emissions of cows by introducing seaweed feed, this technology shows real promise in helping farmers reduce their impact on global warming.