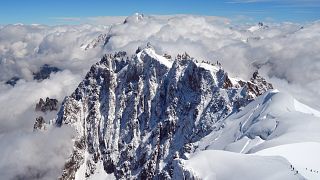 The summit of Mont Blanc, Europe's highest peak, has shrunk by two metres over the past 20 years. It has reached an official height of 4,807.81 metres above sea level.

The new measurement is a result of an expedition by a team of 27 people made up of experts and high mountain guides. Surveyors from the Haute-Savoie region took readings over three days from September 16 and announced the mountain's new height on Wednesday.

"Now it’s up to climatologists, glaciologists and other scientists to look at all the data collected and put forward all the theories to explain this phenomenon," geographical experts told a press conference in the town of Saint-Gervais-les-Bains, at the foot of Mont Blanc.

As alarm grows worldwide over the melting of glaciers, the official height of Mont Blanc has been on a downward slide for over a decade. The highest reading was 4,810.9 metres in 2007.

The average reduction of western Europe's highest mountain peak is 13 centimetres per year. Since 2001, the roof of Europe has been measured every two years to monitor its evolution.

The objective of regular measurements is to create a model of the ice sheet and to feed a precise data bank which will be made available to all experts.

The readings vary from year to year as the summit is covered with a layer of permanent snow which functions as a huge snowdrift and varies with high winds and precipitation.

**Watch the video above to see the report on this shrinking mountain. **

Mont Blanc under surveillance over fears glacier could collapse

Will France's largest glacier still be here by the end of the century?