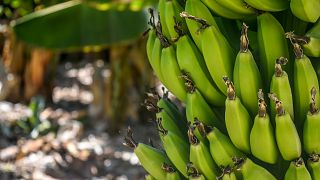 Climate change could soon cause your favourite foods to go extinct.

Global warming is already causing weather patterns to shift across the planet. As they change, so too will the ability for farmers to cultivate their crops and grow food in the quantities many of us are used to today.

This means in the coming years, much of the produce we are used to seeing in shops today might start to disappear.

There are many reasons why climate change could affect the food available to us. Extreme weather could devastate the areas that are used to grow crops and keep livestock. Changing seasons could mess with a crop’s natural lifecycle, and will ruin areas that rely on double cropping methods.

Here’s some of the foods that might not make it to your kitchen as the Earth’s temperature continues to rise.

Coffee is the most popular drink in the world with around 2 billion cups drunk every day. To cater to the huge demand, nearly 10 billion kilograms of coffee beans were produced in 2020.

But coffee plants are being plagued by a destructive fungus called ‘roya’ or ‘leaf rust’ that has thrived in the increasing temperatures of Latin America. Leaf rust causes the coffee plant to stop photosynthesising as the leaves are coated with iron-coloured spores.

Between 2012 to 2017, leaf rust caused more than €2.5 billion of damage and lost profits, forcing almost 2 million farmers off their land.

It’s not just plant killing fungi that coffee drinkers have to worry about either. Changing temperatures are reducing the amount of areas suitable for cultivating beans. In Africa, the number of regions suited to growing coffee is predicted to reduce by 65 per cent by 2080.

Growers are looking into climate resistant plants and other solutions to the problems they face but the future doesn’t look good for coffee lovers’ favourite variety, Arabica.

Another bean that many consider absolutely essential. The cacao bean could face a crop crisis if global temperatures change too much.

Cacao beans need a very specific environment to flourish and can only grow within an area 20 degrees north and south of the equator. They require the uniform temperatures, high humidity, abundant rain, nitrogen-rich soil, and protection from wind that is almost exclusively found in the rainforest.

Worryingly for chocolate lovers, the Intergovernmental Panel on Climate Change (IPCC) estimates that cacao growing areas may face a 2.1 degree celsius temperature increase by 2050, which would dramatically reduce the cultivation area.

Without the conditions needed to grow these beans, chocolate could be set to disappear from supermarket shelves altogether.

From being a great source of potassium to tripping up rival racers in Mario Karts, bananas are the world’s most popular fruit.

Produced in 135 countries, the areas suitable for growing bananas are expected to increase by 50 per cent by the year 2070. So what’s the bendy yellow fruit doing on this list, you ask?

As bananas thrive in tropical environments, the increase in global temperatures might make more land technically capable of growing bananas. The lack of water available in those areas, however, will undo any possible benefit to fruit growers.

Added to the lack of water, rising temperatures might see an increase of Panama and Black Sigatoka disease, a fungal infection that causes bananas to die from dehydration.

The millennial-trend fruit apparently stopping young people from affording their own homes might not stand in the way of financial responsibility for much longer.

Avocados have already stirred controversy as people have started to question their environmental impact. Just like bananas, they are grown as monocultures. This means a single crop is planted without much biodiversity, making the crop more susceptible to pests and diseases.

To prevent the avocados from being decimated, a lot of pesticides are used which can cause damage to the environment when washed off during heavy rain.

Avocados are fussy plants too and need conditions to be not too hot or cold. Requiring over 250n litres of water per fruit also makes them highly susceptible to climate change. With water shortages and varying temperatures a growing threat, avocado lovers should be worried.

Some scientists fear they could be extinct by 2050.

If you enjoy a crisp chianti or a mellow malbec, you may struggle to satisfy that wine-craving in our climate future.

Grape varieties are very susceptible to environmental conditions. The reason why wine names are so heavily protected by their locations is that even the smallest change can lead to a difference in flavour you don’t have to be a sommelier to notice.

If the loss of your favourite flavours isn’t worrying enough, a 2013 study predicted viable land to grow wine grapes on could decrease by up to 73 per cent by 2050. Gulp.