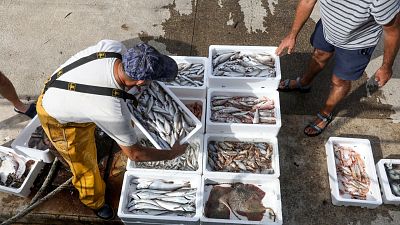 A fisherman unloads the day's catch from the "Edouard François" trawler off the coast of Port-la-Nouvelle, southern France   -   Copyright  RAYMOND ROIG / AFP
By Parisa Hashempour  •  Updated: 27/09/2021

The answer to feeding a global population sustainably looks more blue than green, according to 100 researchers from around the world.

Blue food is anything that has been captured or grown in the water. Five new studies conducted by the Blue Food Assessment (BFA) have just been published in Nature showing that these aquatic sources could help us to tackle climate change and malnutrition.

The vast team of researchers were located across Stanford University’s Center for Ocean Solutions & Center on Food Security and the Environment, the Stockholm Resilience Centre at Stockholm University and non-profit startup EAT.

Their findings suggest blue foods may have a valuable place in the effort to feed more people, more sustainably.

Global demand for seafood is poised to double by 2050, according to researchers. This increasing demand will need to be addressed with more aquaculture and farming instead of traditional fishing to stay sustainable.

By investing in new technology and improving practices at fisheries, they estimate that supply can be increased yearly by 8 per cent. That is 13.6 million more tonnes of seafood on our plates.

Researchers suggest this could translate into a reduction of 166 million cases of nutrient deficiency, a problem that disproportionately affects low-income communities.

"For the first time we pulled together data from hundreds of studies on a wide range of seafood species,” explains Ben Halpern, a marine ecologist at UC Santa Barbara's Bren School of Environmental Science & Management.

I think what made us really excited is knowing that aquatic food could be a useful solution to combating malnutrition, and really showing that comprehensively for the first time.

Blue food stacks up well when compared with on-land farming, says Halpern, and provides a hopeful option for the future of sustainable food and improved nutrition around the world.

When compared with chicken, trout has 19 times more omega-3 fatty acid, oysters and mussels are 76 times richer in vitamin B-12 and have five times more iron and carp is nine times more calcium-rich, according to the researchers.

By decreasing production costs and increasing accessibility of blue foods, “there will likely be a shift away from land-based foods like chicken, beef and dairy,” explains marine ecologist Bren School.

“I think what made us really excited is knowing that aquatic food could be a useful solution to combating malnutrition, and really showing that comprehensively for the first time.”

The climate challenges of blue food

Relying on the ocean for our food is not without its problems. Organisations such as WWF says, “Fishing is one of the most significant drivers of declines in ocean wildlife populations.”

“Catching fish is not inherently bad for the ocean, except for when vessels catch fish faster than stocks can replenish, something called overfishing.”

Just over 32 per cent of fisheries are currently overfished, according to a 2020 United Nations report.

Climate change poses a disproportionate risk to blue food systems and those living in regions most dependent on blue foods too.

Globally, approximately 100 million people catch or harvest 2,500 species of fish, shellfish, aquatic plants and algae as their main source of income, feeding a total of one billion people. These are the people most vulnerable to the effects of our warming planet, explains the research team.

One of BFA’s studies explains how investing in lower-impact foods produced through aquaculture — such as salmon, tilapia, catfish, and carp — has a similar environmental footprint to chicken, the lowest-impact land-based meat.

He adds that there are plenty of opportunities for reducing the impact of existing blue food systems. Changing our diet to include more species with lower environmental footprints could help too.